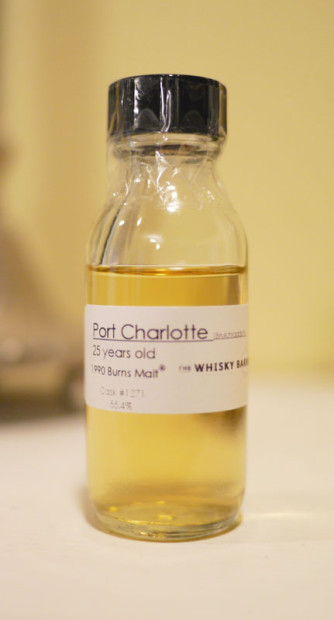 Tasting notes:
Ooh, this opens with a curious mixture.  There’s brightness, but also some dankness.  It’s like the yellow oven light in a kitchen of a basement efficiency apartment.  Now that the oven door is open, I see several cots set out in a rows by a scoutmaster who tucks in fresh linens with perfect, hospital corners.  What kind of merit badge will be earned tonight?  And what ghost stories will animate the blurry shadows into creatures of menace?

The mouth is beautifully peated.  White raisins spelling out a love note to a fellow fifth grader.  “Will you be mi” it reads, for these are some tasty raisins.  Clean linen again, but speckled with souring mildew.  Bacon grease splattered on seldom-used fireplace andirons.  I catch the taste of a menthol cigarette, but from the Renaissance.

The finish is a curled caterpillar’s hookah in the hands of the scouts long after the scoutmaster has slipped into slumber.  The boys adopt postures of self-importance in imitation of oracles, real and imagined, that they intone in low voices.  A hybridized acorn squash-Matunuck oyster forming the centerpiece of a slow-food dinner to which only strangers have been invited.  Loosestrife incense in waxy cubes, but I only know that because in the dim light of the oven they looked tasty.

On the scale of Boy Scout merit badges–
The Port Charlotte Burns Malt 12 Year 2003 from The Whisky Barrel is Plant Science–The merit badge has three options—Agronomy, Horticulture, and Field Botany—the first of which would test the young man’s knowledge of grains.  But it should be noted that the scout is not required to malt barley over peat nor to create a tuber-mollusk hybrid like the singular Port Charlotte does.

–Our thanks to The Whisky Barrel for the sample!