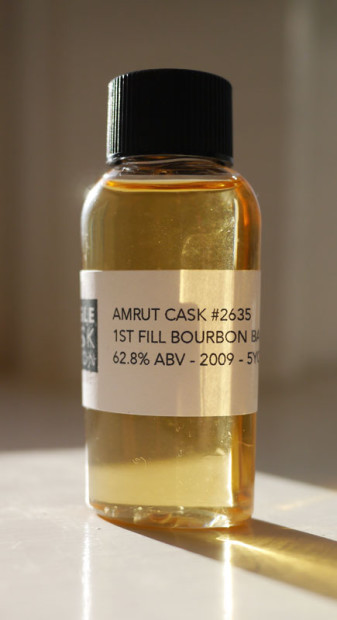 Tasting notes:
The Single Cask Nation Amrut 5 Year 2009 1st Fill Bourbon opens with tea leaves steeped in the dish soap used at Versailles (which was made in the Soapacabana by Lola) and stored in an antique carved Aini-maram (Artocarpus hirsutus) box from Maharashtra. There’s an okra/poblano pepper/ancho pepper-seared haycake you plan on serving to your profane cow on April Fool’s Day. We also got brine and buckwheat chaff, but hesitated to write about it, given how prosaic those are.

The mouth is lamb vindaloo over a bed of spinach that simultaneously is watery and thin, but also strong, like Manute Bol. It embodies the essence of the Orient, and were he still alive, Edward Said would have freaked out about that. An elephant burps, while Salman Rushdie sagely nods. It makes me wish I had no scruples, as I am both elevated and debased. We got musk from a beautiful woman’s axilla—she missed ‘behind her ears’ with her willowy arm while distractedly reading E. M. Forster.

The finish is sucking on an artichoke leaf dipped generously in mint butter. As it opens, the axilla-musk scent’s tendrils curl about my frontal lobes, infusing my being. There’s something harsh on the side—Spiced parsley chutney? Memories of embarrassing remarks in public settings? Pakistan?—that backlights the spreading aloe syrup.

On the scale of people born in India leading remarkable lives in the United States–
The Single Cask Nation Amrut 5 Year 2009 1st Fill Bourbon is Manil Suri– He’s an applied mathematician with dozens of research papers. He’s a popular writer who’s been long-listed for the Booker prize and also won the Bad Sex in Fiction Award (2013). He’s the son of a Bollywood musical director and a school teacher. He’s a whole lot of wild and amazing things—kinda like the Amrut under review.

–Our thanks to Single Cask Nation for the sample!