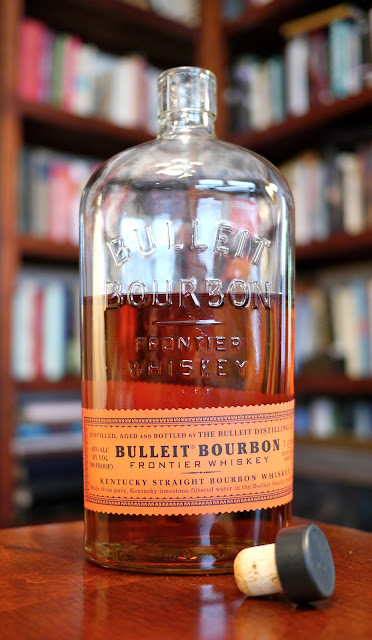 Tasting notes:
Cordovan penny loafers, stuffed with tobacco leaves in place of cedar shoe trees, shipped in a cardboard box wrapped in wax paper.  That is the nose.  The mouth reveals a twist.  The penny loafers have a pair of MS-70 buffalo head nickels slipped into the cuts on the saddle.  The shoes and the coins belong to a big-balled numismatist who used to collect stamps until his philatelist club found him licking collectible stamps and sticking them on his nipples. (They dismissed him and briefly sought to seize his collection through legal action.)  Make no mistake, his coin collecting frenemies do not smile upon this abuse of the MS-70 nickels.  Not one bit.  So we add that air of suspicion to the mouth of this fine whiskey.  The rest of the mouth yields vanilla beans mutated into waist-high grasses on a hot savannah.  A leopard wearing odor-suppressing pantaloons sneaks through to glimpse the okapis and capybara at the watering hole.  Obviously what we have here is a very classic bourbon but with non-classical elements.  Think of the time that Euripides’ Bacchae was staged at Cambridge as if Berthold Brecht was its playwright.  But in fairness, what we have here works.  It’s expertly blended, poured as if from a Swarovski crystal encrusted Vitamixer into hollowed-out coconut shells gilded with white gold.  That’s right.  I’m on the finish now, which tells me you’re getting the same thing.  A pheasant and goat cheese tartine paired with goat medallions topped by poached pheasant eggs.  Pipe smoke puffed by your niece in defiance of your sister’s disapprobation.  Lunch meat used to wrap a dripping ice cream cone, and simply relished after the scoop of ice cream sinks below the horizon of the cone’s opening and it becomes time to munch the sugar cone into nothingness. [Bill: And adding a lot of water dilutes it!]

–On the scale of surprising facts about okapis–
The Bulleit Bourbon is the fact that okapis are more closely related to giraffe than to zebra, to which, at first blush, they bear the closest resemblance.


–Our thanks to Ewan Morgan and Diageo for the sample!