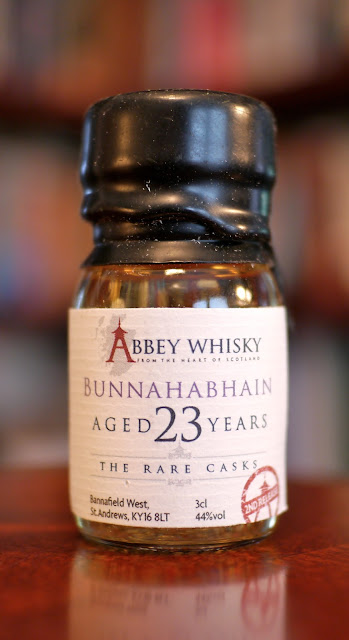 Tasting notes:
This whisky starts out being wound tighter than John’s rect–itude or the World’s Largest Ball of Twine in Cawker City, Kansas. Patience, a virtue, is rewarded. Opens discreetly to roasted chestnuts and black walnuts drizzled with hazelnut oil (minus the hazel, naturally). Old-growth sugar pine groves in mid-morning sunlight, laced with undertones of vanilla that was reverse-engineered from vanilla ice cream. Van Gogh’s Wheat Field With Crows.

[Stephen: Bill, is that the dusty, musty, oily, frame-y, canvass-y smell of the painting itself, hanging in the Van Gogh Museum in Amsterdam, or is that the dirt-road-y, grainy, rainy, cloud-y, crow-y smell of a wheat field with crows? Just curious.]

Time acts on this dram like a speculum opening a Georgia O’Keefe painting—Flowers of Fire—revealing a pink-orange world of Mango Lassi Creamsicles™ (marketed only in Indiana by confused vendors) and Texas State Fair deep-fried sponge cake with a Dreamsicle™ center. Yum.

The finish is bourbon-y, a dab butter-y, a tiny bit bitter-y, and a lot maple-licious. It goes on and on, like the urban-legendary-orgasmic-unto-death singing of Clare Torry on The Great Gig in the Sky from Pink Floyd’s Dark Side of the Moon. For that matter, it went on as long as Dark Side of the Moon stayed on the Billboard charts! I’m still tasting it.

Lamb kebobs without cloves, but with za’atar spice, drenched in molasses that was aged in a balsamic vinegar cask. After lamb, a lemon balsamic pot de crème de menthe.

[Stephen: Bill! Is that a pot de crème or a crème de menthe? On second thought, I don’t want to know.]

The last tolls of the Liberty Bell after a waggish Whig or Tory tried to play the Big Ben carillon changes on it. It’s a resonant echo, not a diminuendo or decrescendo…

Rating:
–On the scale of songs about paintings that were recorded in the American Southwest–
The Bunnahabhain 23 is…what? Can you say that a bit louder? Look, Stephen, I was just trying to tie together all the themes like you said I should! Fine, I won’t force anything…
–On the scale of nude pictures of Georgia O’Keefe taken by her husband, famed photographer Alfred Stieglitz–
The Bunnahabhain 23 is one at the San Francisco MOMA–It is beautiful, dispassionate, aesthetic, and worthy of contemplative savor…except for the fact that he was holding the camera backwards.


Our thanks to Abbey Whisky for the sample!