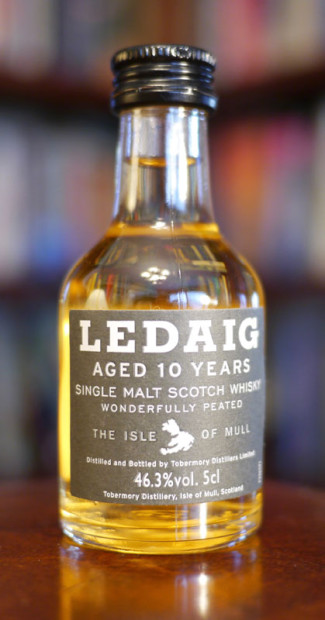 Tasting notes:
The nose begins with either roasted fennel trapped in a drawer in a furniture factory or real carrots held in the hands of a cartoon rabbit as he gets sucked into a swirl of a frog pond. Whichever of those two it is, it’s also the green tinged aquarium buried in the back of the tropical fish store where the owner stores her water pipes and hookahs. In other words, this is one rich and funky dram on the nose.

On the mouth, it’s candied peat, gray with smoke and resplendent with bright flavors. We could also taste a portabello mushroom pizza where the cap is the crust and the anchovies on it are whole–and still alive, gasping for breaths, as the whole pie is ushered into a 900 degree brick oven by an old class Frenchman wearing the cologne he wears when he meets his mistress. In other words, it’s a complex, beautiful mustmeister on the mouth.

The finish is like having slightly scorched quinoa pancakes drizzled with peat-infused syrup–that is, until the smoke bellows up from your throat. That smoke is like smoked anise seed compressed into a pencil eraser and then used to erase from the Magna Carta the signature of a bishop who gave really boring sermons. In other words, the finish yields an amazing–and unexpected–sense of satisfaction.

On the scale of other words for great words–
The Ledaig 10 is “abundant” or “stout”–Beyond being a great word in its own right, “plenitudinous” also has the virtue of being an apt one word description of this dram.