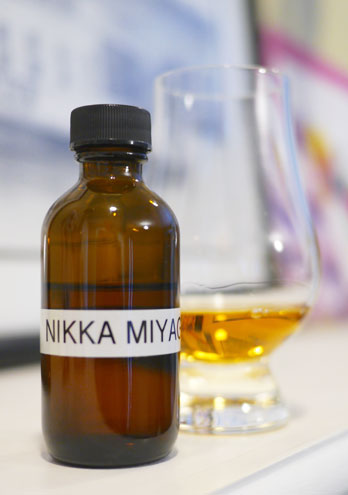 Tasting notes:
This dram is a story in three rather unrelated parts. The first part is a light, perfumed story all its own, one that opens with our protagonist growing up with a lemon tree as her twin sister (“I am Lemon Groot!”). Once she’s of age, our protagonist falls in love with a citrus magnate (Nelson D. Lemonfeller), making her essentially a Meyer lemon that married up. She’s pampered and perfumed better than a charcoal roasted wheat grain, better than the slender leaves at the end of a fennel branch after they’ve been waxed and then heated over a cedar firepit.

In part II, our protagonist finds herself tasting grapeseed oil and walnut oil at the Burning Dram Festival (it’s held in a field in southwestern Japan). But this isn’t any walnut or grapeseed oil: this is infused with pine cones, nutmeg, cloves, and cranberries stuffed with filberts first dusted with cinnamon. What is one to do in such a scenario, other than give oneself over to the experience, which our heroine does. The resulting experience is fiery and raw and lasting.

In part III, just when she begins hoping that the finish will not come, the finish arrives. The only problem is that the finish is the beginning of the rains as she finds herself scrambling to finish an ark. Our protagonist is up to her elbows in sap so concentrated it’s highly flammable. But it turns out it isn’t sap at all, but the blood of abused raisins (they’d been soaked in wine) that all been members of the same really tough gang. Whether that was a result of transubstantiation gone awry or a weird holdover side ritual from the days of Bacchus, she cannot be sure. The effect is amazingly drying, which is good for the ark in this story, but for one experiencing the finish, closer to sucking on keyboard spray to get high. For those who have never tried it, let’s just say it’s a very nice, very clean high. In other words, there’s a lot recommend here.

Rating:
On the scale of random threads being (actually) woven together to make for a great story–
The Nikka Miyagikyo 12 Year Old is David Mitchell’s Cloud Atlas–A bit hard to get a handle on early on, it’s a veritable quilt of pieces from across space and time. By the end, you find that it’s expertly woven together indeed.
–Stephen