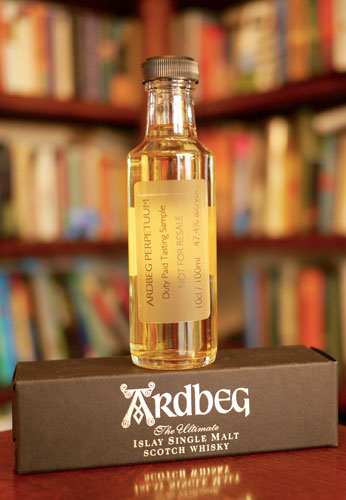 Tasting notes:
Aaaah, Ardbeg!  It is impossible to nose this dram and not be transported to a 19th C. surgical theatre overrun with injured soldiers.  No! I mean, transported to the Islay distillery just off A846 in Port Ellen.  Just one whiff of those cigarettes stubbed out on your grandmother’s cherished hope chest, by your “friend” Travis, and you’re back there near the kiln.  Just one bracing announcement from the Bengay® ointment soaked into the greasy arms of the well-loved Barcalounger and you’re standing next to the spirit safe nosing the new make.

Lemons, soaked in kerosene, and then fired from a potato cannon.  A huge stack of pancakes with diesel sludge syrup, served with a side of more pancakes.  A Bugles® snack cracker used to play Taps over an elaborate Lego battlefield tableau.  Lead pipes used in a Goth organ concert.  11 year old girls burning Bonsai trees praying to a goddess of their own creation.  And what a terrible, terrible sacrifice this goddess asks of them.

On the mouth, I steel myself for a…surpassingly drinkable and even refreshing dram!  Wow, this is tasty!  Piña Colada made in the Azores with creosote powder.  Slate roof shingles sprayed with sea foam.  A quick slip of the nipple of a baby’s bottle into my glass would bring a colicky child to quick, contented sleep.  I am that baby.

The finish is, in a word, Ardbegian!  [Bill: Not helpful.]  Okay, it’s a surprisingly sweet finish, an even victorious finish.  It’s like the last 2/10ths of a mile in a marathon when you’ve shattered your personal best and feel like you could continue to run several more miles.

Rating:
On the scale of Lego battlefield tableaus (or perhaps it should be “tableaux”?)–
The Ardbeg Perpetuum is this recreation of the Battle of Antietam by Scott Wright–Loaded with verisimilitude, born of careful inspection of contemporary accounts and artistic renderings, this is an audacious masterpiece and one that he has continued to improve through comments shared by his audience.  As Scott explains in comments to the video, “The General with two faces (Brigadier General Robert Toombs) no longer has two faces as he now has only one face.”  That right there is the kind of commitment to getting it right that Ardbeg has when it comes to whisky making.
–John

–Our thanks to David Blackmore and Ardbeg for the sample!