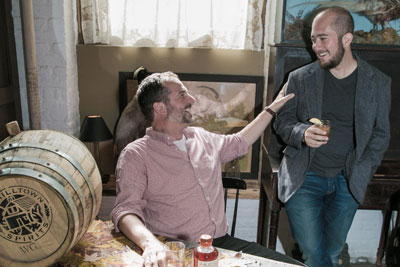 MI: Gable, we arrived at Tuthilltown for the first time on the day the late Charles Gordon of William Grant & Sons was meeting with you to negotiate your relationship with that company. You were kind enough to introduce us to him before you showed us around. Beyond cementing forever our whisky street cred, what has this relationship meant to the Tuthilltown Distillery and the Hudson Brand?

GE: Wow, I had forgotten about the fact you guys happened to be around while Mr. Gordon was visiting Tuthilltown for the first time.  Though maybe only 6 years ago, it seems like a another life.  I remember thinking that Mr. Gordon seemed so comfortable and at home, almost nostalgic.  Perhaps because he was reminded in some small way of where his family came from, and the potential they saw and realized through hard work and perseverance.   That small parallel between Tuthilltown and William Grant was, I believe, the foundation for what has become a strong and mutually beneficial relationship.

This partnership has had an enormous impact on Tuthilltown and the Hudson brand in multiple ways.  Most importantly, the access we have to this wealth of distilling experience and expertise has helped us to hone our skills and constantly improve our craft, our operation, and of course our whiskey.  On the brand side, the vast distribution network paired with the amazing sales and marketing teams of WGS, has helped Hudson to expand its reach and secure mainstream placements and general consumer awareness both in the US and abroad.  Plus we get to stay in nicer hotels.

MI: Han, please tell us you’re named for Captain Solo. No wait, please don’t tell us you’re not. You’re in with us so good from the start because of your name, we’d just hate for you to lose that. The question? Oh, right. What’s your best time finishing the Kessel Run?

HS: When I’m amongst loved ones or in front of a thirsty mob of unruly craft whiskey nerds, I’m Han Shan. But when I’m alone, I’m Han Solo. Look, I get it; everyone loves the Falcon. And when you’re that good, who cares about a Parsec here or a Parsec there? Also, for the record, I shot first.

MI: Gable, is it true that your dad planned on having six more sons named “Gable” so that he could oversee the House of the Seven Gables?

GE: He actually did, but I killed them all.  There is only room for one Gable in the House of Tuthilltown. 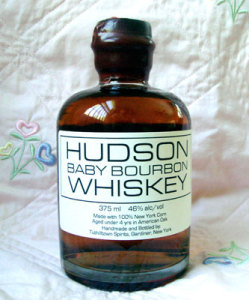 MI: Han, before you came on as the new Hudson Brand Ambassador, you were, naturally enough, a human rights activist. Please explain to our readers how you see the near-term plans for Hudson as the logical extension of Gandhi’s Indian Independence movement.

HS: Shit, I forgot I caught a buzz at brunch and slipped you my PhD thesis draft on that Glenfiddich-branded thumb drive (they get all the cool swag!). That’s gotta stay confidential till the committee signs off. But I will tell you that I wanted to come evangelize for Hudson and Hudson alone because of the spirit of independence and badassness (sp?) that drives everything the company does. There are too many human rights and social justice challenges to name that must be solved before we as a society can address the fundamental right to drink good whiskey. But like an American student of Gandhi’s once said, “the arc of the moral universe is long but it bends towards good whiskey for all.” Or something like that. Also, last time I was in India, I drank a terra cotta-hued “whiskey” made of nearly 23% glycerin which reminded me of washing spilled antifreeze out of an old nylon sleeping bag in the back of my truck by putting one little section of it at a time in my mouth and sucking. I just wanna make clear that I don’t blame Gandhi for that.

MI: Gable, Tuthilltown distillery got its impetus after the town denied a proposal to turn the property into a climbers’ ranch for the nearby Shawangunk mountains. The distillery has been wildly successful! Do you ever wonder what would have happened if instead of whimsically starting a distillery, you had instead whimsically started a superconducting supercollider?

GE: I’m sure that in one of our alternate realities, the TFPC (Tuthilltown Farm Particle Collider) has already proven or disproven the existence of the Higgs Boson.  In order to do so however, Brian Lee (Co-Founder) had to develop a new strategy for magnetic light beam collision through a jury rigged collider made from old dairy farm parts.  Concurrently, Ralph Erenzo (Co-Founder) was bouncing between Albany and DC in his ultimately successful quest to create legislation favorable to Farm Particle Colliders.  So yes, I’ve wondered.

MI: Han, Hudson has pioneered quick aging techniques by using smaller oak barrels than the norm. Have you considered instead using oak thimbles to super-age your whiskey?

HS: Not that I’ve heard. But with distillers aging their whiskey underwater, at sea, in the basement of a working brothel in Nevada, etc., we do wanna keep up. So do keep an eye out for Hudson Whiskey Lightspeed™ (hint on the process: see “Kessel Run,” above). Actually, the thing I’ve been excited about is that while some of the really big whiskey makers have to focus on consistency, so that a bottle of their whiskey tastes exactly the same at a bar in Singapore or on a liquor store shelf in Topeka, we aren’t afraid of our whiskey getting better, as it does with every damn batch. We still go into small barrels—10 gallons, for the most part—that quickly infuse those bold flavors of vanilla, caramel, and oak you find in every bottle of Hudson, but we’re also going into a variety of larger barrels, up to ‘traditional’ 53-gallon oak barrels, which we age much longer, of course. As Ralph likes to say, we don’t age to an ‘age statement,’ but to the distinctive flavor profile we’re looking for. And nowadays, a big part of that is achieved by blending together Hudson’s well-known small barrels with larger barrels of longer-aged whiskey that offer additional maturity and complexity. And of course you may have enjoyed some of our whiskey that grew up listening to dubstep. Or Zeppelin. Or Mozart. But I think the dubstep-“infused” whiskey tastes best.

MI: And a follow-up on that last one: we love that you use the three-gallon oak barrels but wondered where you keep the miniature coopers.  Are they, in fact, Oompah-Loompahs?  And can we meet them?

HS: Our coopers are a slightly reclusive bunch but not because they’re fictional confectioners. Rather it’s due to the indisputable fact that they are bizarrely good-looking. Seriously, no one will leave them alone. Everyone wants a piece of their genes, or to get into their jeans. So, sorry, but of all people, you are definitely not getting to meet them. 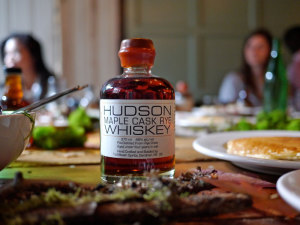 We’re using this pic again because it’s that good.

MI: Gable, Bill here. We love that Hudson released a Maple syrup-flavored Bourbon and that Al Wood released a (Hudson) Bourbon-flavored Maple syrup. I meant to serve the syrup to my young nieces and nephews on their pancakes, but instead poured the flavored bourbon. They loved it, ate it all up, and slept all morning! Is this FDA-approved? Hold on a second, there’s a social worker at my door…

GE: The Hudson Maple Cask Whiskey has been a big success.  It should be noted though that this is not a flavored whiskey, but the Hudson Manhattan Rye Whiskey finished in Vermont maple syrup soaked barrels.  What’s the difference, you might ask….  Flavored whiskey is for children and this whiskey is not.  So as much as the kids might like it, I would suggest marking the bottles a bit more clearly. Hudson should only be enjoyed by adults in moderation.  Even Baby Bourbon.

MI: Han, we love the Wood’s maple syrup. Have you thought of mixing your New York Corn Whiskey with corn syrup to make a line of personal lubricants? No? Hmmm… Well, would you like to see our mockups for the ad campaign we dreamt up for it? (Our graphic designer said the imagery was vivid.) 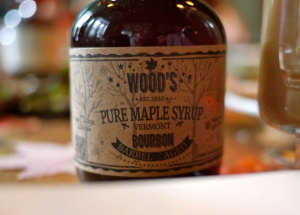 HS: I appreciate your graphic designer’s input but definitely send over the mockups. Am I in ’em? Can I be? I’ve been contemplating changing my Facebook profile picture. I must say, I’m intrigued and may have to perform some corn whiskey-fueled experiments this weekend. I learn from the best and most of Gable’s weekends are corn whiskey-fueled experiments. Ask anybody.

MI: Gable, we know that some craft distillers start out by sourcing their whiskey until their own stocks are ready for the market, while others, like you, make their own from the start.  What are your thoughts on the various ways major sports leagues have conducted expansion drafts to populate the rosters of the new teams?

​GE: Listen, so much has been said lately about sourcing and blending whiskey, then bottling under a new or “craft” label, and personally I’m okay with this as a process.  Not as a short cut, marketing ploy, or deceptive practice.  To protect the consumer, and the actual artisan/craft/farm/micro distillers, truth in labeling should be, and is being pushed by internal industry organizations. On one hand I feel for some of the folks and brands bearing the brunt of this backlash, because many are in fact making something unique and delicious.  On the other hand, some have also been knowingly deceptive through careful wording on labels and promotional material.  Be delicious and be honest, and the sources or processes become less important.

I don’t understand your sports references and mumbo-jumbo.  I steer clear of sports involving balls and teams. 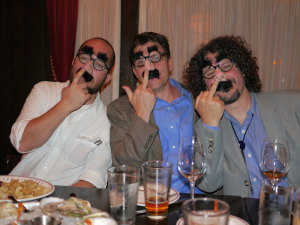 GE: They food kept coming, and there were people around with funn(e)y accents, and lots of whisk(e)y being poured. I’m forgetting who broke into song, but I have a feeling it may have been Freddy May. Yeah, Hey, Whoa, Damn, that was a fun evening.

Ahh, the life of a Whiskey Ambassador.