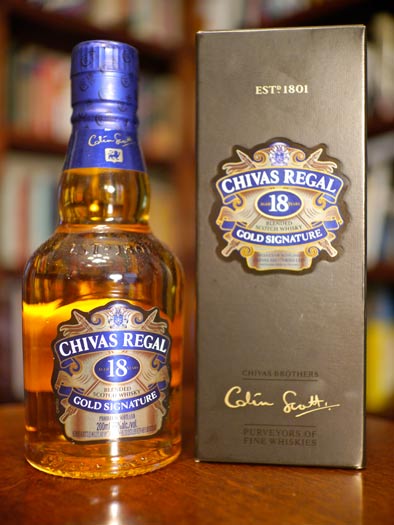 Tasting notes:
The nose of the Chivas Regal 18 Gold Signature asks a question: What’s currantly playing at the Mango Citrusplex? The answer is Moby Dick, A Perfect Storm, and The Old Man and the Sea. Which isn’t to say that this drink is briny or tarry; rather that behind the Fruit Ninja stealth assassinations, the Kingpin—Mr. Big—is some kind of fish oil addict. Mr. Big has big money to spend, and does so acquiring Hollywood memorabilia, one example being the sweat-stained dust-crusted white hat worn by Dan Blocker (Hoss Cartright) on Bonanza. It’s a curious blend between a ten gallon hat and a bowler. (Didja see what I did there?)

The mouth is creamy with a lot more fire than the 80 proof tag would suggest. It’s a tad inoffensive and meek, like an embarrassed 18 year old kid wearing the epitome of high school chic at an uptown white tie affair (circa 1960). It’s savory without relying on herbs, spices, or umami at all; there’s nothing to explain it except tradition and a retro-exploration (in black nerd glasses, ironically taped at the still-functioning hinges) of that scary and mysterious time: The 1950s. John added, verbatim, “A dad would drink this.  Uncomplicated, no talk back, just reliable and steady, unlike his harridan wife and thankless kids, who hone the arts of ingratitude and gracelessness on the whetstone of sullen self-pity.” Been to your therapist lately, John?

The finish is smooth and rich. I could guzzle this after work, during work, and—let’s face it—before work. After all, ferret-herding isn’t overly taxing. It dies out like a Coleman Fuel lantern whose knob is quickly turned to off, leaving only a shadow of light in our memory. It’s cleaning up the Sunday brunch on Monday morning, finding a number of mimosas made with Bollinger non-vintage champagne, and after a hurried glance over the shoulders, sucking those puppies down. They’ve fallen apart, but not in a drastic way, but rather in a deconstructive one.

–On the scale of  things that we thought gone but are still around if we look hard for them–
The Chivas Regal 18 Gold Signature is the drive-in movie–I imagine sneaking a bottle of this out of my parent’s liquor cabinet and going to the movies with it, back before DUIs and DWIs and suspended licenses, when everything was seen only through rose-colored glasses nobody ever got in accidents. Oh, and at the drive-in? Double- and triple-bills, baby, to go with my doubles and triples.