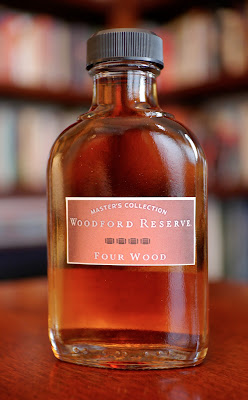 Tasting notes:
Nosing out the competition, the Woodford Reserve Four Wood, abv 47.2%, Master’s Collection opens with misty dank musty donglewood.
[John: Bill! A dongle attaches a portable electronic device to another electronic device.]  Fine! It’s the teak deck of a distressed cruise ship, not quite foundering the Gulf of Mexico, not quite under attack by Somali pirates, not quite crunched by icebergs in the North Sea; rather more like a sudden inundation by fermented nori-disoriented be-barnacled flying fish thwapping into the pilothouse with a syncopated rhythm. Is it a Ping G20 Four Wood Fairway Wood golf club? A Tiger Woods? Woody Hayes? The Four Dank Woodsman of the Apocalypse? But I digress. It’s clearly—and I will brook no argument on this—a didgeridoo used as a bong by a misguided woman, deluded by Eat, Pray, Love into believing that simply traveling to exotic places and doing unusual things will result in spiritual awakening, vast riches, and eternal love. The discarded didgeridoo then was used as a giant bombilla for infusing maté and henna tea in a sandalwood vat. Bonus! The henna turns your tongue black! Most remarkably, it’s a sorceress performing her signature trick: Making a normal bourbon nose disappear, leaving behind dried warm October leaves, a cashmere scarf, and the wet paper towels that wiped up the tears of joy shed by a loving father at his only daughter’s wedding. Not to pile on (this is kind of like laughing at Julia Roberts’ mouth and Barbara Streisand’s nose), but you know how a club sandwich already has one slice of bread too many? Just add a fourth slice of Ezekiel Bread: we are on overload.
However—and I’m very happy to write “However” at this juncture—on the mouth, I’m getting delicious cough syrup, the kind I could get addicted to, sucked through a weeping willow straw studded on the interior with the embers salvaged after a strange Ecoterrorist group burned all the first editions it could find of Aldo Leopold’s A Sand County Almanac. It’s all-day suckers, toffee nips, macadamia butter, and St. André triple crème cheese, but really, St. André THE GIANT triple crème cheese. Obey! yells Shepard Fairey. [Oops. On the advice of the oft-changed Malt Impostor House Counsel (who is it this month? Cartalk’s lawfirm Dewey, Cheatham, and Howe?), I mean, Ste. Andrea the Limbo Dancer quadruple crème cheese (the “a” at the end of the name entails an added crème). Yield! yells Fepard Shairey.]
Peanuts, soft-boiled, in a brown paper bag. Served at a polo match. Chukker, anyone? Finishing strong, with a savory sachet stowed in the top drawer of an old beloved maple étagère.

Rating:
–On the scale of things stumbled on at imdb.com that made me roar with laughter for no good reason–
The Woodford Reserve Four Wood, abv 47.2%, Master’s Collection is Stellan Skarsgård’s first TV series, “Bombi Bitt och jag”–Why is it funny? I don’t know, it just is. Why does the Woodford Reserve Four Wood have an odd nose coupled with a rich and fulfilling mouth? I don’t know, it just does.


–Our thanks to Andrea Duvall and Brown-Forman for the sample!