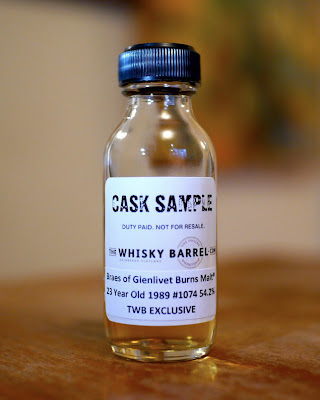 Tasting notes:
It’s time that readers know the truth about me, a long suppressed truth that I have kept hidden even from Bill and Stephen.  My therapist, spiritual advisor, life coach, and confidante (who also happens to be my mother) agrees that I could benefit by publicizing my condition and could help others.  I have a rare condition called Alien Hand Syndrome, sometimes called “Dr. Strangelove syndrome” (and in German, oddly enough, “Herr Doktor Merkwürdigliebe Syndrom”), but almost never called Xeniapapakakachiria.  Rarer still is that it is not due to any neurological deficiency or injury; on the contrary, it is entirely environmental or “epigenetic” as I’d like to say (partly because it causes my doctor to drop her head into her hands in exasperation at what she calls my “misuse,” my “utter misuse” of the term).  Anyhoo, my condition means that in special circumstances my left hand grips my Glencairn glass against my will and brings it up to my lips without my conscious awareness or participation.  This happens only in the presence of certain conditions, when specific elicitors are present, that is, when I have a bottle from a shuttered distillery (hellooo, Port Ellen) or from an independent bottler (Springbank Burns Malt 14 Year Old; I’m looking right at you).  So when we have an independently bottled offering from a then-shuttered distillery it is safe to say that I’m perfectly powerless.  I’m a veritable Mr. Skimpole of moral lassitude, with the impulse control of a cast member of Toddlers and Tiaras (it’s the mothers I’m talking about here; the preschool beauty pageant contestants are remarkably poised).
All of this is to say that I have to reproduce the experience of drinking it ex post facto.  I had passed the reins of my will to my alien hand who rarely permits me to nose the glass.  As if I’m reading from a jostled Etch-a-Sketch™, I shall now try to reproduce the experience.  The nose is crackers and jam, honey on a cookie sheet baked at 170°F for half a day, cloves placed in a pepper grinder (but the pepper grinder put back in the cupboard).  I’m also getting GIMMEGIMMEGIMMEEEEEE!!!!!!—
–whoa, did you see that?  Even the memory of the dram prompted my alien hand to spring to life and start typing!  I’ve restrained it so I should be okay now.  The nose also had some savory depth to it, perhaps an old backgammon board chewed by a mouse and then WANTWANTWANTWANTTTTTTTTT—
–-I am really sorry about that.  I’ve got better restraints now and should be okay.  The mouth was, as I recall, splendid.  The mouthfeel alone was exceptional; perfectly smooth but weighted down improbably, like some super-cooled liquid kept above freezing by a weird chemical process I wouldn’t understand which results in some super dense but still liquidy liquid that just enwraps the mouth with tiny cashmere mufflers designated for each tastebud.  The ;klj—sorry, I’m getting yanked around here a bit and ;jk;k the keyboard just needs to be settled better—the finish is perfectly autonomic, compulsive, unconstrained, inscrutable—no, sorry, that’s my condition, not the whisky.  The finish was, Oh God no!  ^cough^ unngh!  ^cough^ ^gag^ unbelievably long lastiiiiiii ^guh^

Rating:
–On the scale of names for an alien hand–
The Braes of Glenlivet Burns Malt 23 Year Old TWB Exclusive is “Baby Joseph”–The patient described by Doody and Jankovic in 1992 experienced her troublesome hand as a mischievous infant and would, in such moments, instruct it to “stop being naughty.”  I could say the same of this compulsively drinkable and very special whisky.