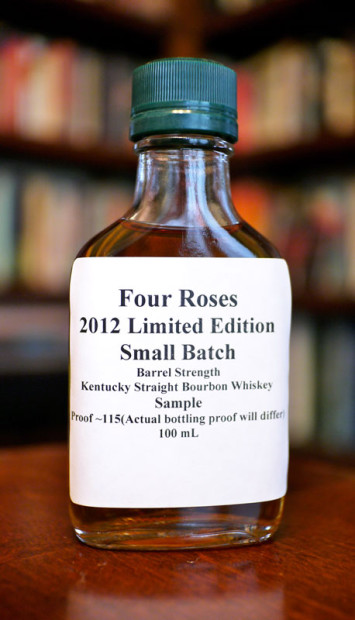 Tasting notes:
115 proof.  I better make sure I’ve got a cup of water next to me.  And a fire extinguisher.  One-fifteen.  If it was a boxer it would fight in the Super Flyweight category.  I don’t doubt for a moment that this bourbon packs a punch.  The nose is a festival of desiccated raisins opening up like dried tea leaves in boiling mineral oil.  But that’s not all.  We get cherry Slurpee™ syrup smuggled in Big Gulp™ cups into the back of a 1957 Pontiac Safari Transcontinental.  A bit of fresh ink from a henna tattoo, pooling on a tile floor.  And measure of tobacco spit by Kafka’s Red Peter into a brass spittoon, before he learned to speak, but after he had developed a taste for schnapps.
All of this is to say, this is a nose that excites.  The mouth delivers on that promise and then some.  Freshly mown lawn, burnished brass—I’ve got it!  A brass rotary push mower!  It must be of ungodly weight and inefficiency though, so I’ll say it’s powered by butter and marshmallows.  For it is pushed by a gigantic Rice Krispy snack cut into the shape of a minotaur with a cognac-soaked raspberries for eyes.  Yes, that captures the mouth perfectly!  There are herbs and corn and other grains.  A fruit salad with corn, farro, and thyme.   White peppercorns stuffed into 12-gauge shell casings and blasted through a fruit leather bullet-proof vest.  The finish is a rye menthol rub, very like the greasy salve rubbed onto the underbelly of Otto, the beluga whale that mistook itself for one of the sea lions at San Francisco’s Pier 39, until consumption set in.  (In their grief the sea lions never returned.)  There’s enough heat on the finish to give you the fleeting worry that TB has set in.  But quickly enough some woody gentleness envelops you, like oak balusters sanded to a piano finish with flower petals held in the hands of fairies.

Rating:
–On the scale of succinct expressions of a system of ethics–
The Four Roses 2012 Limited Edition Small Batch is succinctest: the Wiccan Rede which states “An it harm none, do what you will.”–How the heck can these witches summarize their ethical system in a mere eight words, which is probably fewer elements than most of their potions require?  But I submit to you that it is no less remarkable than this Four Roses.


–Our thanks to Nick Clark and the good folks at Four Roses for the sample!