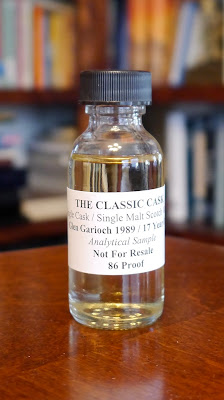 Tasting notes:
This 17 year-old whisky smells oddly like my basement. Of course, I’m in my basement, so that may be an influence. Other than typical basement odors like velour bean bag chairs, trapezes, and the distinctive ionized smell that strobe lights and glitter balls combine to make, the G^2 has a faint, patrician-like nose, upturned at lemons, licorice, and nasturiums (am I allowed to write that, Stephen?) mashed into a honey paste, and spread on an old barber-shop strop purchased as a flophouse prop by a an actor playing a cop atop a pawn shop.
Light and balanced, like a Bird on a Wire chewing sunflower bracts, petals, and logarithmically spiraling seeds. The bird regurgitates, oddly, lemon curd eclairs wrapped in hobo blankets, suffusing you in the body heat of another. I’m not sure the clauses of that sentence segue with the kind of glissando we aim for here at Impostors, Inc., and I need an expert opinion. (No, John, not yours. Back in your cage!) *Whew* My clairvoyant parrot conducted a séance, and apparently Leopold Stokowski AND Leonard Bernstein both approve.
The finish is like doing Tai Chi in a field of Pimpinella anisum trampled by a mob of angry yoga instructors wearing toesox. There’s an exponential increase, essentially a troop (of yoga instructors) surge followed by a long taper. For the connoisseurs, here’s the logistic equation modeling the first 40 seconds or so of the finish, where M(t) models “mouth explosions,” and “t” is seconds. I tried nanoseconds, but it was a billion times harder:

Rating:
–On the scale of patrician noses–
The Classic Cask 1989 Glen Garioch is Audrey Hepburn’s neck—Kind of swan-like, but mostly an conjunction of shoulders and head that is matchless. I’m not sure exactly how that fits into this particular dram, but maybe Stephen or John could help me out. Stephen? John? Am I alone here? Alone in my basement with Audrey Hepburn, Leopold Stokowski, and Leonard Bernstein?