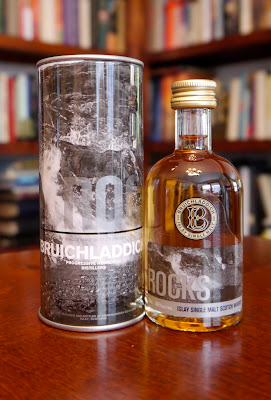 Tasting notes:
We couldn’t agree more: Bruichladdich totally rocks.  What’s more, we know that the first 10-year-old expression under the control of Jim McEwan and Duncan McGillivray is beginning to hit shelves now.  I salivate at the very thought.  Today, though, we have the redoubtable Rocks expression before us.  I found it deeper and plummier than the Bruichladdich Waves, with wonderful sherry depth like a burp from your alcoholic aunt.  Bill objects to my characterization of plumminess, and under pressure I insisted that I meant plumier to capture the woody depths of a French pencil box left in an alder-wood secretary.  Of course we all agreed that there was macadam mixed with molasses and a black cherry coulis.  And all of this in a furniture show room abandoned under the threat of a hurricane.  The nose and mouth pull in the same direction, like a slot machine (jerked by the alcoholic aunt) turning up characteristic Islay icons: a smoking brick of peat, a salty tidal pool, a ewe, and a barley stalk.  That is to say, then, that there’s more smoke than peat, and a briny, winey wonderfulness without a mineral salinity you might expect from the name.  What’s hitting me is what I want to call a golden mouthfeel.  And I’m not talking about that game you play in the boudoir with Krugerrands.  I’m talking about grain reaching its fullest ripeness before being cut down, soaked, and then spread on the malting floor.  On this one-armed bandit, you win when no icons are the same.  For there is balance here from beginning to end.

Rating:
–On the scale of hand games used as a selection method–
The Bruichladdich Rocks is—you guessed it—Rock, Paper, Scissors—The inventiveness of Jim, however, recalls the Spock-Lizard expansion, which allows for five hand signals.  Indeed, we would not be surprised to learn that Jim McEwan is behind the development of RPS-25—or even RPS-101.  At that point, what do they even name the hand gestures?  And how can they be distinguished visually?  Wouldn’t the slightest ambiguity allow a player to slightly retract a finger or subtly alter the angle of a knuckle in order to switch from “capibara” to “sextant,” or from “despondent cuckold” to “broccoflower head,” and win the round?