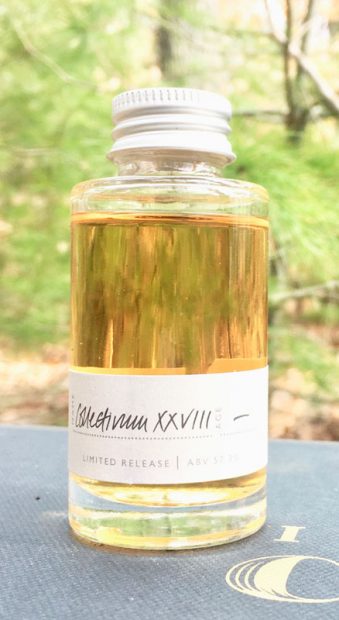 Tasting notes:
The Collectivum XXVIII Limited Release is a blend of whiskies taken from all 28 Diageo distilleries. Why only 28? I’d like to believe that’s because 28 is only one of a handful of known perfect numbers, which were dubbed by Euclid as τέλειος ἀριθμός.

[John: When he first did that, was it a dub-step?]

WHY DO YOU ALWAYS DO THIS WHEN I TALK ABOUT MATH?

Anyways, it’s the first time Diageo has ever paid tribute to itself in such a manner. And the nose opens with slices of Jazz apples being smoked over hickory lumps. Maybe the apples are Fujis—I’m not going to take a stand on that matter. There’s also some compressed marzipan burning, as well as super-heated maple syrup. There’s “new car smell” from an old Ferrari that’s been bottled into an eau de cologne available only in a secret room in the flagship Valentino store in Roma that’s right by the Spanish steps. There’s more fruit on the smoker, and they’re drizzled with Madagascar vanilla; peaches, pluots, maybe one extremely ripe banana, and a tightly clustered bunch of Corinth grapes, also known as champagne grapes. A streaker wearing only Harrison Ford’s leather jacket from Raiders of the Lost Ark just ran by, too. Adding water brings out the rarely-used hot tub at Howard Hughes’ Hollywood home.

The mouth is potent, pungent, and puckery, but not pernicious. There are tannins aplenty, almost as if they’d been massing for the chance at breaking out of the bottle or breaking out of my glass. Water doesn’t tame this beast, but does give it room to frolic about and decide what is behind the warm tannins. There are cotton balls used as insulation for a hamster habitrail, cinnamon jujubes, Satan’s sweat, and the fond scraped off of a cast iron griddle that had recently, extravagantly, seared burgers made from A5 Wagyu Kobe steaks.

The finish brings lime, the latest Anish Kapoor installation made from willow branches, more jujubes (but in different flavors), sweet sassy molassy, barbecued pork ribs, Helen of Troy, and the summer palace throne of Catherine the Great. Even with a generous dollop of water, there’s magma, lava, and a comet realigning my polar coordinates. This is strong, complex stuff that demands serious consideration, much like a hypothetical proposal for merger between Google and Apple. (Hypothetical negotiations would probably break down as Tim Cook and Sergey Brin argue over which new name is more reflective of corporate synergies: Gapple or Apoogle. And John, please spare me from your “Google is really called Alphabet now” crappola, okay?)


Rating:
On the scale of technological marvels that we’re a little bit afraid of–
The Collectivum XXVIII Blended Malt Scotch Whisky 2017 Limited Release is jetpacks for elementary school children–What’s that? This branch of the multiverse doesn’t yet have those? Fine, then it has to be proprietary hedge fund algorithms that make deals on the scale of nanoseconds–Those algorithms will make you rich, to be sure, but wouldn’t you prefer it if instead the hedge fund relied on a bunch of people in a pit, waving strips of paper and screaming at each other? Or groups of people sitting at desks that had three or four landlines, shouting “Buy!” and “Sell!” into them? I guess on second thought, I’ll take the nano-second-algorithms, thankyouverymuch!