The Wigle Terroir Rye Project is like the Jimi Hendrix Experience, with more rye and less, uh, Jimi Hendrix. It’s not nearly as ambitious as the Buffalo Trace Cask Project; however, the smaller-scale lends itself to easier comprehension and appreciation. Instead of Very Many different casks made from Very Many different oaks trees stored in Very Many different ways, the distillers at Wigle opted to take rye from three Very Different terroirs (in alphabetical order): Minnesota, Pennsylvania, and Saskatchewan. 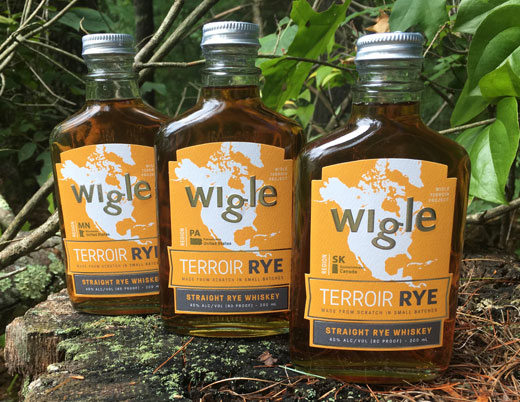 A few more technical details: Wigle consciously and conscientiously harks back to the Monongahela rye that was used by some of the earliest distillers in the United States—rye that led to the Whiskey Rebellion in Western Pennsylvania from 1791–1794. For the project, Wigle diligently held as many variables constant as possible: The three mashbills were the same: 80% rye, 20% malted barley; the mashes were distilled in a consistent manner, and were poured into 23-gallon charred, new American oak barrels. All three types were aged for two years before being bottled at 80 proof.

Wigle, being comprised of professionals, also sent samples along the production for chemical analysis via gas chromatography. The details are of interest (to a distiller or a chemist), and for interested parties can be found here. If it is facts or truth you want, you’ve come to the wrong place. Here, instead is found our opinions and our whimsy (which of course cut a straighter road to the truth than any philosophical syllogism).

It struck us that the best way to compare these was head-to-head. I would’ve preferred a blind tasting, as well as a deaf one, so as not to hear John’s moans of ecstasy nor Stephen’s caterwauls of delight. Also, if it were blind, I couldn’t report that the colors of the three ryes are roughly equivalent.

Tasting notes:
The Minnesota (MN) nose evokes what I think of as a standard or classic rye. It’s high and piercing, like a jazz flute solo, it’s grassy, like a lush late spring lawn, and herbaceous and floral, like an ikebana class held in a Penzey spice shop. The Pennsylvania (PA) is low and strong. Beyond classic rye notes, there is fresh-cut cedar stacked in a lumberyard, ready for siding a luxury riverboat. Lurking behind is also some black cherries plucked from a pint of Ben & Jerry’s Cherry Garcia. It’s robust and round, almost like it was aged in an ex-wine cask. The Saskatchewan (SK) is soft, with the vanilla rising so smoothly, it’d be easy to convince me that this was some intriguing bourbon with a lot of rye in the mashbill. It’s even rounder than the PA, and if this was a round robin tournament like the World Cup, the SK would have won its group.

On the mouth, the MN is a tart little, uh, tart made with rhubarb, wild raspberries, sloe, fern leaves, and Thai basil. It casually asserts a rye dominance, inviting all comers to do battle with it. The PA declines to fight, and takes a different tack to explain its version of rye: It’s surprisingly understated, like a lion who purrs loudly rather than roaring. It’s acerbic, like a comic playing a college campus, working within the modern boundaries students expect to be observed.The SK is dreamy, watery like a Monet painting in shades of teal and aqua, excuse me, sarcelle et turquoise. There’s also a lancing of spearmint, as if Wrigley and Wigle combined on a rye/mint-flavored hybrid gum: Wigley’s.

The finish of the MN continues to evoke classic rye. The herbs—sage, bay leaves, and tarragon—reassert themselves. The flowers have been weeded, because it was opposite day for the gardener. There’s a long plaintive note, like a bugle playing Taps far away over the plains, crying out for a mixer to make God’s Own Cocktail. The PA’s finish picks up the spearmint, devolves it into molasses, and transforms it into adolescent dreams: Savory and sippable. The SK is muted, subtle, determined. It is the opposite of relentless while somehow also having a spine of titanium, unwilling to give up; nay, unwilling to even concede an inch that might bring it a slightly better deal. All three of their finishes resonate long after standard expectations have been met, all three allow their character to express themselves in the fading of their actuality as they become poignant memories. 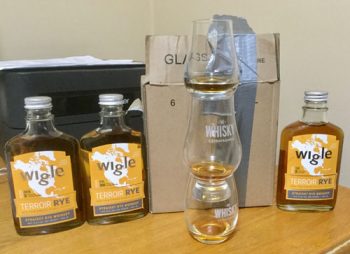 
DON’T TRY THIS AT HOME, PEOPLE! We are experts, albeit Impostors.

–Our thanks to Meredith Meyer Grelli and all the good people at Wigle for the sample!