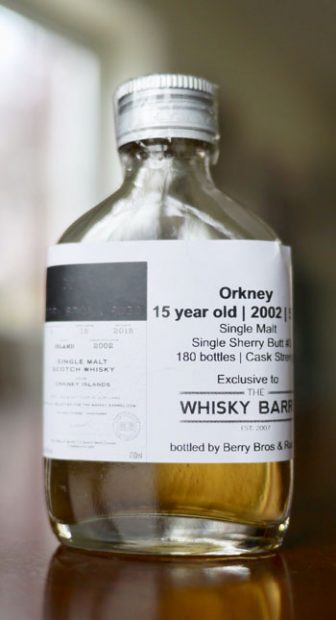 Tasting notes:
The nose is a grasshopper frolicking in the backyard with a dirty peppermint stick.  “A bug pole vaulting?  In the dirt?”  Bill asks, dismissively.  No, not that, I think to myself.   I have something different in mind, and initial impressions routinely give way to clearer and more precise articulations.  So let me start again, this time with the cumulus clouds in the sky to capture the benign smokiness.  And then I’ll add a synthetic firestarter log that compresses peat and Christmas trees, to add festiveness and warmth.  Ethereal light comes thanks to the elongated paintbrush of Manet, which allows an incandescent brightness to creep around the edges of a hay bale.  All of this beauty is like that in a slightly smoky wine.  “A Rauchwein?” Bill asks more helpfully.  Yes!  I am sure of it now.  What I’m nosing is a Viking wine!  Which, of course, means that it was wine plundered from the Mediterranean and then drunk over a funeral pyre.

The mouth, though, is not winey at all.  It has heft and oomph, as well as warp and woof.  You see, it is Alsatian alpaca wool woven from a rickety loom powered by the Rom exercise cycle.  I don’t know how fit the operators are, but I can tell you that you can weave a lot of wool in four-minute increments.  What is striking is that it doesn’t play as hot as it is; I think that if I sipped this in four-minute increments, it would catch up to me too quickly.  The only hint that it’s from a sherry butt is that it has a long spice road on the finish (see below).  Otherwise it is clean and bright and peat forward.  Cinnamon is there, but not stewed stone fruits and harissa.

I spoke of the long spice road here, and I think the finish line is strewn with mentholated paper straws.  Stephen announces that it makes him want to wear a zoot suit and a floppy hat.  But back on planet Earth, Bill and I are comparing the finish to the perfect lamb chops: burnt on the outside, but tender inside.  The heat of the fire has charred the rub of saffron, lemon pepper, and betel leaves into something that looks and feels like braided crow feathers, but thankfully tastes more like fairy wings.


Rating:
On the scale of Viking conquests in the Mediterranean–
The Orkney 15 Year 2002 specially selected for The Whisky Barrel by Berry Bros & Rudd is Björn Ironside’s conquest of Luna–Unable to break the walls of a town he believed to be Rome, he sent word that he was dying, had made a deathbed confession, and wished to receive the sacraments.  A small honor guard and the “stricken” Björn were received inside the city only for him to spring up from his coffin, battle those around him, and open the gates to the city.  What Björn lacked in geographical knowledge, he more than made up for with cunning and ambition.

–Our thanks to The Whisky Barrel for the sample!