[This is a 14 year-old whisky matured in Sherry seasoned oak casks and ex-Bourbon casks that represents the middle tier of the new travel retail exclusive line from Highland Park we’ve termed “The Animal Parts” line. More on other animal parts from HP soon…]

Tasting notes:
Jon Snow’s direwolf is named Ghost and he’s extremely loyal. I don’t know what that tells us about what this dram’s supposed to be like, but it seemed worth pointing out. I note this because my direwolf is named Pooky and has always been pretty loyal, too, especially when someone else tries to take my sandwich. This, however, is the limit of my knowledge of wolf loyalty.

But Pooky does love a cream cheese danish covered in caramel and apricots–and oddly enough, that’s what we got on the nose of this dram right at the beginning. But then Pooky brought me a diving mask–complete with rubber, tar, metal fastenings, and shale–festooned with heavily perfumed lilacs. Oh, what a smart puppy! He’s replicating the nose of this dram as I write this! Good boy, good boy. There are also bourbon notes here, but they’re notes from the underground. No, boy, I don’t want to read Dostoyevsky right now, but thank you. Thank you, boy.

The mouth features lemons shod in lime skins. Pooky demonstrated this by wearing a regular wolf’s pelt. He direwolf-laughed a lot at that one. The vanillins here are definitely villains–and Pooky demonstrates this by thrashing my last Madagascar vanilla pod like a chew toy. Ah well. There are also notes of rubber and tar lingering in the background, but they present more like long-standing truck stop coffee. Pooky demonstrates this by running off and bringing a ritalin-addled trucker back into the house (he’s none too pleased, but also remarkably compliant). We also got cinnamon rolls, crispy skin of a chicken cooked under a brick, and anise. That combination is also known as “the chicken that crossed Colonel Sanders.”  Pooky thrashes his rubber chicken in approval, then uses my Peugeot pepper mill to grind some black pepper on top of it in what is clearly a sign of dominance.

On the finish, it’s orchids transmogrified by an alchemist in a crucible. God only knows where Pooky found those, but it does look like…well…unfortunately he brought the alchemist’s arm back with him. Lovely. There are also notes of lemon that has moved three steps beyond caramelization into a spicy finish not unlike the Stargate sequence from  2001: A Space Odyssey, only more whimsical. Only…holy hell…Pooky seems to have brought me the exhumed arm of Stanley Kubrick as well, just to make this point. Ugh. Still, this is a lovely blend of flavors: unassailable, balanced, replete with character, carefully crafted, and more complex than we would have expected. It’s no vulcanized rubber bobcat chew toy, but Pooky does seem to like it pretty darn well. As do I. 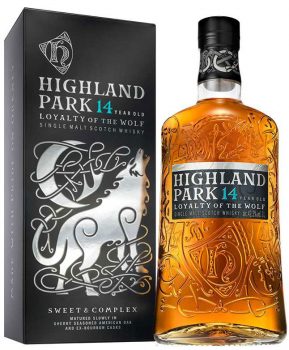 Rating:.
On the scale of wolf loyalty–
The Highland Park Loyalty of the Wolf is the fact that wolves mate for life–Don’t know if that’s really true or if wolf divorce lawyers are just really difficult to spot in the wild, but either way, it’s a great thing to help with whatever negative wolf PR there might be out there, especially among those who raise herd animals. I mean, it’s really been a boon for the penguins, so it seemed like the right play to boost their image.