[This new expression in Compass Box’s core range is a blended malt focused on whisky matured in Sherry (48% of the blend) and Spanish red wine casks (25%).] 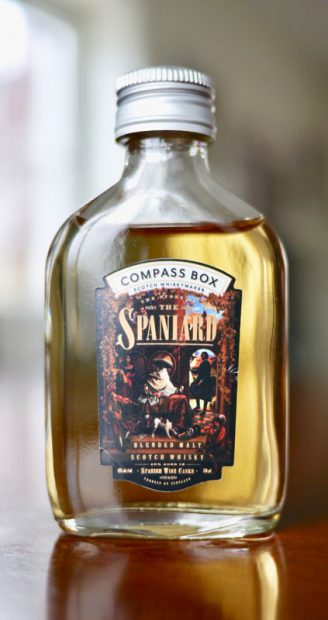 Tasting notes:
The nose opens with a healthy whiff of rich Sherry funk that makes me feel like this Story of the Spaniard might be “The Cask of Andalucia”–featuring a not-so-unfortunate fellow getting closed up in a Sherry butt and left there to drink his way out. (Italian revenge seems to go in nastier directions.) There are notes of Portobello-crust pizzas just coming out of a brick oven burning mossy, wet logs. The creamy buffalo mozzarella on the pizzas oozes onto a bed of arugula on the plate, creating an aroma that calls me from across the room. The beginning of this story of the Spaniard portends a very happy ending.

The mouth is spicy like great Christmas cakes are, but also like old wine red zinfandels are–at the same time. It’s a remarkable, muted feat. There’s also a richness in there like the backside of a piece of water-soaked tree bark presented on a bed of deep, damp loam. The mouth makes one consider pouring this dram into a huge bowled red wine glass. This part of the Story of the Spaniard feels more like an alternate ending to Roald Dahl’s “The Butler,” where Tibbs and Estragon actually train the Cleavers to appreciate the finest Rioja. It would be a fantasy, given who the Cleavers are, of course, but this dram brings on such dreams.

The finish fires on the back two-thirds of the tongue with the kind of deep burning lust for life that Robert Jordan feels as he falls in love with Maria in For Whom the Bell Tolls. That one’s not really the story of a Spaniard, but at least Generalissimo Francisco Franco is still dead. And the finish here is as long as that joke has remained funny. For Sherried whisky lovers, this dram will flat knock your socks off.


Rating:.
On the scale of stories about Spaniards–
The Compass Box The Story of the Spaniard is Guillermo del Toro’s Pan’s Labyrinth–A dark fantasy with a keen moral core (also set around the time of the Spanish civil war). Like Ofelia, this dram passes the ultimate test. The faun is very pleased.

–Our thanks to Compass Box for the sample!