The recent history of Tomatin Distillery cuts against many of the recent trends in the Scotch whisky industry. In an era when many big distilleries are getting even bigger and when most distilleries are looking to increase production, Tomatin has cut its production capacity dramatically. When other distillers are ordering more stills and washbacks, Tomatin has taken nearly half of theirs offline and, in some cases, has dismantled them and sold off the parts. And while many whisky producers are pushing their blends into new markets, Tomatin has turned from cranking out massive amounts of spirit for blending to focusing almost exclusively on producing single malt whisky. 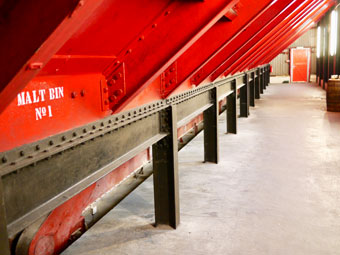 The ancient history of Tomatin Distillery is pretty compelling, too. Distilling in the area likely dates back to the 16th century, but the earliest definitive record of distilling comes from 1746. A local man named Gillies McBean fought valiantly and died in the Battle of Culloden (legend has it that he took out 14 English soldiers before being killed). When authorities went to notify his wife, they found an illicit still in his home, at or very near the current site of the Tomatin Distillery. 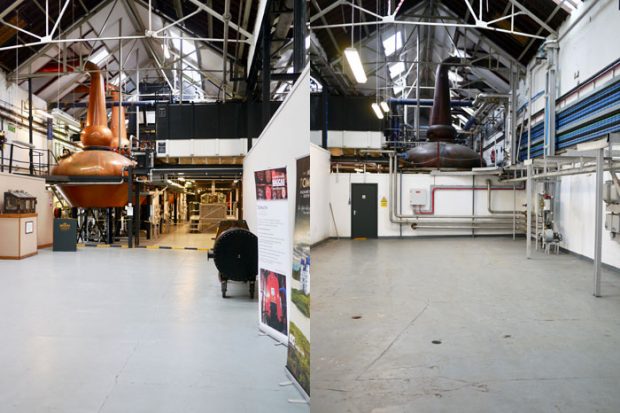 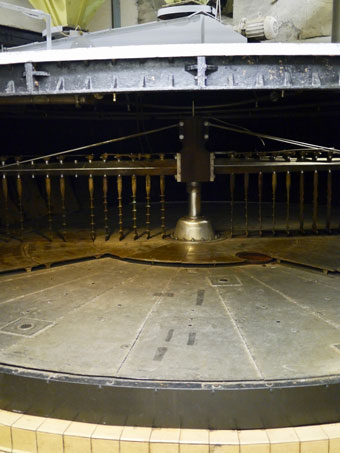 The distillery received its official license in 1897, and was a powerhouse of malt production for blended whisky during the 1950’s, 60’s, and 70’s. In 1974, Tomatin boasted the largest production capacity in Scotland, and would still hold that title if it weren’t for Macallan’s new distillery coming online recently. At that time, Tomatin had 24 washbacks and 23 stills in constant operation. But the 1980’s whisky bust hit Tomatin especially hard, and in 1986, the Japanese company Takara Shuzo brought the distillery out of liquidation and set it on a new track.

Now, despite still having a massive distillery footprint, Tomatin is down to 12 stills–having sold off the others for copper scrap–and doesn’t even use all of the ones it has left (Tomatin currently uses 10). It has a dozen corten steel washbacks sitting mothballed (though there are some plans to use a couple for storage), and is only at 80% of warehouse capacity. Tomatin has used this dismantling to its advantage, especially for visitors. It’s one of the few places a lay person can see the inside of a condenser tube. And it has converted one of its two massive stainless steel mashtuns into a visitor attraction by cutting away part of the side of it so that visitors can stand inside of it and inspect the plates at the bottom. 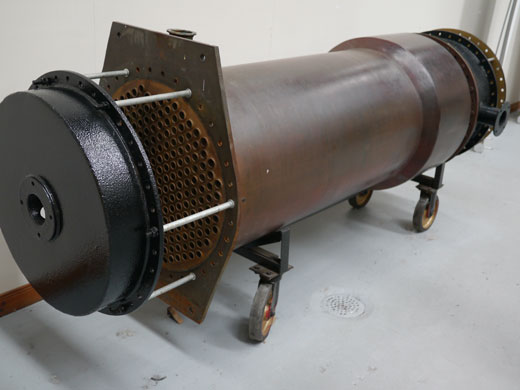 Under the new ownership, the distillery has shifted focus from quantity to quality, producing spirit slowly in batches four and a half days a week instead of running the whole operation continuously. Despite the current high demand for Scotch whisky, Tomatin’s focus is on its single malts and supplying malt for its own blends (the Antiquary and the Talisman). Any production beyond that would be spirit sold as a commodity to other companies for blends, and Tomatin does not want to subject itself to the whims of such a market. Plus, with strong single malt sales growth (Tomatin’s grew 27% last year), the excess capacity will likely come in handy in the future.

But Tomatin is also looking to the future in perhaps more important ways: in 2013, Tomatin had a biomass boiler installed that now addresses 82-83% of the entire distillery’s heating needs. The Environmental Committee of the Scotch Whisky Association (on which Distillery Manager Graham Eunson sat for many years) has set a target of reducing the carbon footprint of the industry by 80% by 2050. Tomatin’s installation of their biomass boiler helped it reach that target 35 years early. 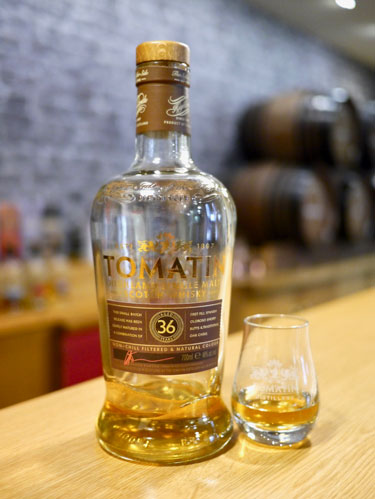 Since it was designed to be a modern production facility, the aesthetics of the distillery always took a back seat to its ability to produce fine spirit (and back in the day, lots and lots of it), Graham Eunson describes Tomatin as “a distillery that only a mother could love.” But this once huge industrial plant for whisky has reinvented itself for the future of whisky and the future of the whisky industry. And with an approach to wood management that focuses more on first- and second-fill casks than before, the whisky (and the smart new branding) is reflecting the attention to quality Tomatin has worked in recent years to achieve. 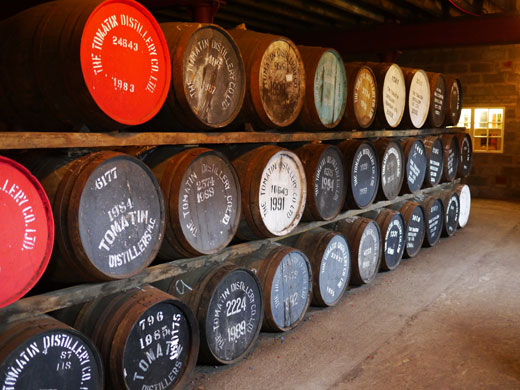