I was fortunate to be able to nab a reserved seat in the Amrut Master Class, which was run by Ashok Chokalingam, who’s been with Amrut for 14 years. He’s currently their Global Brand Ambassador, their Assistant Master Distiller, and their Formula One Race team’s top driver. [Stephen: Bill! There’s no way Ashok is a Formula One racecar driver!] He was recruited in 2004 to help Amrut crack into the United Kingdom market, a feat which he slowly pulled off by finding pub owners and other partners to host blind tastings of his delicious juice.  Regardless, here I sit at the Hyatt, live-blogging the Amrut event of the evening:

[John: This is being posted quite a few days after the event. Bill doesn’t really know what “live-blogging” means, does he?] 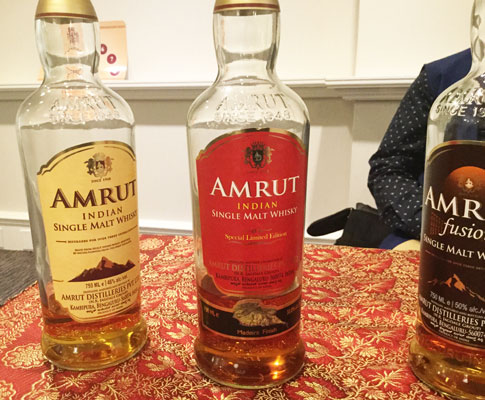 Your intrepid reporter, hot off breaking open the Case of the Stolen Cask, is waiting for the tasting to begin. [John: That “Case” is wholly a product of your imagination. You can let it go any time now, Bill.] One inescapable thought percolating through my mind is that although I’ve had Amrut, I’ve not had Amrut. By that I mean, whenever I’ve had Amrut, it’s been deep into a whisky show when I’ve perhaps already tried 20 or 30 different whiskies. As such, for me, Amrut has never had a stage of its own to shine on, to have the spotlight solely on it. [Stephen: Bill, we’ve actually reviewed four different Amrut expressions! I’ve even taken the liberty of linking to three of those reviews here, one of which you wrote.] Anyhow, as I was saying, I couldn’t help but wonder: Will it wilt under the pressure of my critical gaze? Here are things I learned from Ashok:

*It is the first single malt whisky exported from India (malted barley, yeast, and water, aged in oak barrels).

*India is largest per capita consumer of whisky in the world. (Drinkers drink about a case of whisky per year.)

*There is evidence that distillation happened in India as early as 320 BC.

*Why does India make and drink whisky? It was the British influence; the first distillery they buil was in 1827 in the Himalayas. For a while, there were more distilleries in India than in Scotland.

*Amrut is a Sanskrit word with a lovely dual meaning, Nectar of God and Elixir of Life.

*The barley is grown in northwest India, and there is a fundamental difference in the starch and protein compared to Scottish barley.

*The family began distilling single malt whisky in 1987, and they think of Amrut as the missing link between Scotland and Kentucky. 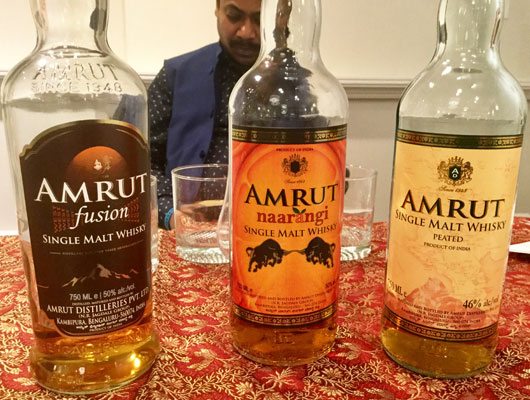 Below are my tasting notes, which, given the live format, are necessarily incomplete:

Whisky 1, Amrut Single Malt Classic: (crowd-sourced notes on the nose: fruit, butterscotch) Ashok had us cover the top with one palm and warm the glass with the other for a full minute, then let the high volatiles steam off. After so doing, I got ENORMOUS COCONUT! Under it, dried figs, lemon bark. On the mouth (not crowd-sourced), chewy, full, not coating. Light. Ashokh says this is a breakfast whisky—I like the way he thinks. It was matured in an ex-bourbon cask.

Whisky 2, Amrut Single Malt, Special Edition, preview of a wine-cask finish, 100 proof: Super fruity on the nose, burnt roasted nuts, some molasses stirred into coffee. On the mouth, a lot of tannin (from the wine? The oak?) Light, Sherry-esque, but different. The 1st aging: Ex-bourbon, the 2nd aging for 2.5 years in European oak, Madeira barrel. Really nice–both of these have been revelatory.

Whisky 3, Amrut Fusion: (crowd-sourced nose: earthy, smoky, orange citrus) burnt embers. Barley from India and Scotland, the latter being peated. (Hence: Fusion.) The mouth is very, very smooth, filling, yet light. The goal is 5ppm peat. For each batch, they balance the ratio of Scottish vs. Indian barley to get the peat right.

Whisky 4, a new product, Amrut Naarangi, which is Hindi for orange, 100proof. Nose: (crowd: wine, raisin, white grape, Sauternes,  fruit–sounded like ham? yam? C’mon, crowd, you’re letting me down) lemon meringue pie, lemon bars, very sweet! To create this whisky, Amrut ages orange peels and wine in ex-Olorosa sherry casks for two years. Then the cask is cleaned out, and they put in 3yo Amrut in it to age for another 2.5 years. Rich, delicious mouth. Long creamy finish, nice tingles. Lovely! Sweet little nip at the finish, like a kitten trying to understand how claws work.

Whisky 5, Amrut Single Malt Whisky, Peated, is made from 100% Scottish peated barley, at 45-50ppm. It’s 92 proof, and has—don’t be shocked—a super peaty nose. The crowd found dried fruits. After warming, I got a rasher of baked bacon and various tropical fruits. It was super smooth on the mouth, and a long, nice finish.

On the whole, it was a marvelous tasting. I learned that I love Amrut and that they, too, are ceaselessly innovating, pushing flavor frontiers, and questing ever for the elusive perfect glass of the Nectar of God/Elixir of Life.

The Extravaganza was again delightful, and rather than subject a heretofore-patient reader to another torrent of words, I’ll let the pictures take over after this last thought. The SMWS gods looked upon last year’s iteration, and saw that it was good. However, they thought of subtle tweaks to improve it, symbolized to me first and foremost by the glass. This year’s glass is a little bit shorter and a little bit rounder. The overall effect, and it’s a design element I can’t explain, is just, goshdarnitall, more pleasing. It’s like they called in Michelangelo and said, “Make a better glass, okay?” 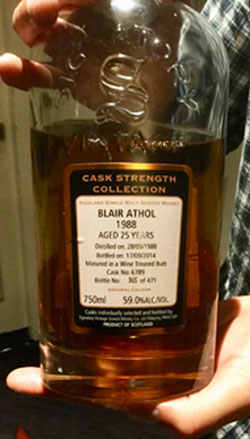