[This is a 16 year-old whisky matured in “Sherry seasoned oak casks” that represents the high-end of the new travel retail exclusive line from Highland Park we’ve termed “The Animal Parts” line. More on other animal parts from HP soon…]

Tasting notes:
“The Long and Winding Witchy Woman,”  “Peaceful Easy Feeling and Let Die,”  “Band on the Run to Hotel California.”  These were the mashups I was hoping for when I read about the Wings and the Eagles supergroup that the Edrington Group was helping to facilitate.  (Bill: “Do we tell him?”  Stephen: “Nope.  Not yet.”)  So much quality rock and roll on stage at one time!  Would they get along with each other?  Who gets to stand in the center of the stage?   I open my eyes and see that Bill is holding a glass just under my nose.  The look on his face tells me that I should focus.  So I do.  I get orange-peel skis for a waterskiing squirrel.  Marie Antoinette’s lace collar.  A row of violets growing in a ravine bottom making the most of their 15 minutes of photosynthesis.  Myrtle leaves that Myrna Loy leaves by the front steps.

The mouth is the bracing whiff of gunpowder bitterness, a touch of grapefruit pith, and church pew gum.  But then the sweetness comes on in a big way, riding waves of spicy fruit.  I feel almost like the whole taste wheel is glowing.  Such is the voluptuousness on offer.  Whitmanian multitudes, a quilt of paradoxes, a Technicolor dreamcoat.  What is this if not the whisky formed out of a Ben Franklin/Ken Kesey lovechild?

The finish is a gold doubloon sunk into a claret-colored candle.  The night will go long before the glinting metal appears to those at the table.  They are drinking rum punch darker than a moonless night and served in hollowed-out pineapple mugs that someone smoked like a ham.  How else to explain the finish that is fruity, smoky, and woody in such appealing measures?  I feel like the time I took vanilla cake, scrapped off icing, put the cake in the toaster, and then put on raspberry jam to see how close it was to toast.  In short this finishes like a good night’s sleep following an honest day’s work. 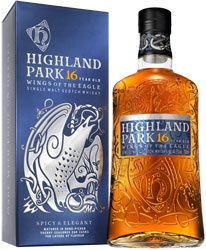 Rating:.
On the scale of deep thoughts occasioned by a bumper sticker–
The Highland Park Wings of the Eagle Travel Retail Exculsive is the thought that if this whisky was alone in a cage at an animal shelter, I would adopt it, take it out for long walks, and then I’d put a sticker on my own minivan that reads: who rescued who?