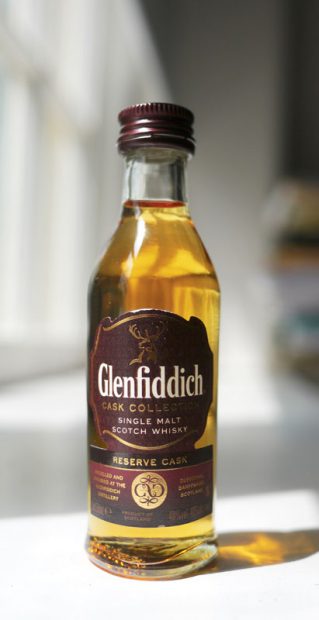 Tasting notes:
On the nose, this one is plummy and pruny and yet still fresh, like how it smells on a spring day after the rain stops, but before the sun has come out again. It’s a Stephen Hawking dram: it’s bright but still deep. But we also found a tiny note of funk in there, like the character flaw that a devil’s advocate brings out in a candidate for sainthood–or like the sick burns Hawking laid on John Oliver when he interviewed him. Give it a little time, and it opens up even further, presenting like a very fruity cough syrup that is also succulent and ever so slightly meaty, like boysenberry lamb sausages formed from a single lamb intestine.

The mouth is deep, with a distinctly crispy, fatty, well-cooked turkey skin note playing right at the surface. Then come caramelized brownies, grilled grapefruit halves, and the like in a smorgasbord from a health resort focused on grilling. It’s light, yet filling.

The finish offers the sort of unity in the savory dimension that roasted turkeys rarely achieve. It’s subtle and slightly dusty as well. The finish seems to start late, but then rolls on admirably. In fact, it’s as if it slowly slides out of its coat and declares that the only thing getting ripped up tonight is the dance floor.


Rating:
On the scale of impressive facts about Stephen Hawking–
The Glenfiddich Reserve Cask is the fact that the equation that made him famous merges concepts from thermodynamics, relativity, and quantum physics–It’s quite an improbable and unexpected combination, but it is indisputably a winner, opening our eyes in ways we could have never expected.