At times this job is difficult.  That’s not because I attended a weekend-long trip to Denver that culminated with VIP admission to the Third Annual Cask Thief festival at Stranahan’s Distillery.  No, the difficulty resides in trying to convey what this experience was like.  So I ask the reader to consider: what sort of experiences in your life might prepare you to appreciate next year’s festival?

I give you these suggestions to draw from: your birthday, back when birthdays mattered; the record-release day of your favorite band, back when bands mattered; a first kiss; an all-day, outdoor concert festival; a guided tour of country shrouded in mystery; an out-of-body experience in which you see the light, walk toward the light, and get absorbed into the light.

If you combine aspects of all of these, you’ll get close what I experienced back on June 23, 2018.  What the Cask Thief festival does is transform Stranahan’s Distillery into an enormous birthday-party-record-release-music-festival-travel-tour-Heaven kind of thing.  Mark your calendar now  for June 2019.  Yup, just block out the whole month.  You won’t regret it.

In a nutshell, the Cask Thief festival offers the chance to try six different cask strength expressions of Stranahan’s American Single Malt whiskey.  It sounds simple, right?  But Rob Dietrich, Jess Graber, and everyone else at Stranahan’s make it into something much more than that.  The festival, you might say, distills the essence of their Rocky Mountain Single Malt into a four-hour, multisensory experience.  You get to peek behind the curtain and appreciate the deep connectedness that this whiskey has to the American prairie and the deep connectedness that the people have to each other.

Most readers already know the Stranahan’s origin story that involves a brewery and a barn fire.   And certainly our readers will have told jokes about master distiller Rob Dietrich’s resemblance to Wolverine.  But the reason you visit Stranahan’s is to understand how the stories and personalities continue to influence the whiskey.  And there’s no better time to do so than when you can be joined by more than 700 Stranafans under an azure blue sky. 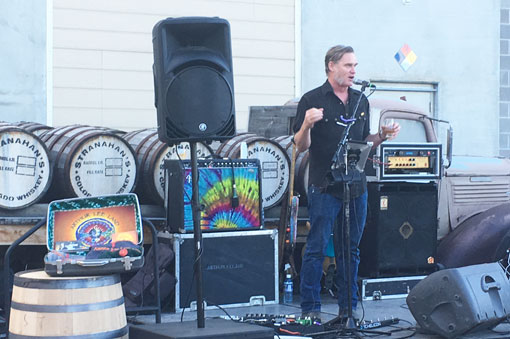 The Cask Thief festival begins when you receive a wristband, a passport, and a Glencairn glass and step into the distillery where…  Oh, my God! They have turned the whole distillery into a whiskey theme park!  The six casks are placed at different stations throughout the distillery and warehouse so it’s like a grown-up version of Pokemon Go!  (Gotta catch ‘em all!)  You can get your sample straight from the copper thief in whatever order you wish to try them.  But with each pour, you receive a stamp corresponding to that cask.  For this reason, springing for the VIP ticket is a smart move.  This gives you a seventh page in your passport that enables you to revisit any one of the previous six.  And if this wasn’t enough, you can also purchase a 375ml bottle of any one of the casks (or two if you have the VIP ticket).  These “stolen sips” bottlings enable you to carry away your favorite spirit to enjoy later and, as in my case, lord over friends who were too busy to join in.  (Hey Bill, how’s your mother in law doing?  Better, I trust?).

In addition, there was live music, delicious barbecue, local ice cream (with a special “Stranahan Brickle” flavor), and cocktails.  In addition to these, you could get pours of their standard lineup.

Let me say a few words about this lineup.  These included the Standard, the Diamond Peak, and the Sherry—each bottle capped with distinctive shot glasses that matches the label.  All of these are made from the same wonderful, 100% American single malt distillate that they produce as many as 28 runs of per week.  But the differences emerge in maturation, where time and cask-type make the difference.

John with Jess Graber and a recalcitrant pair of Grouchos

Rob also produces an annual Snowflake release that appears in first week of December and is only available at the distillery.  Not only does this release enable him to play around with experimental finishes and aging, he can also set about blending them until he has found the right profile.  Each one is unique and never-to-be-repeated.  [Bill: Like a snowflake!  Stephen: Yes, Bill.  Like a snowflake.]  It is no wonder that these releases have become legendary.  Hearing Rob talk about the Snowflake (the next will be the 21st version issued), you see how deeply his passion and creativity are engaged.  After years of waiting, he can look over the casks and audition them for inclusion in the next bottling.

I mention the Snowflake release because the Cask Thief festival also offers distillery-only purchases of unique, unrepeatable whiskies.  But when you think of it, the Stolen Sips are really a Deconstructed Snowflake.  You get to stand where Rob does, trying each cask out, really listening to what each is saying, and imagining the harmonious unions that are possible.  It not hard to imagine him turning the dials on the recording studio soundboard, seeking the right balance to produce the next hit album. 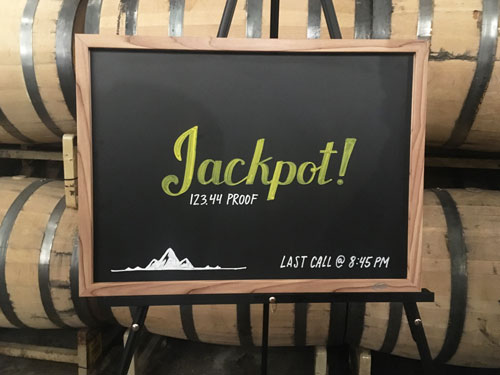 But you’re here because you want to read about the headliners of this year’s show.

Taken together, these casks offered a study of how maturation, at altitude, affects the delicious Rocky Mountain Single Malt that Rob and the others members of the Stranafam produce.  The robust spirit holds up through a variety cask conditions and ages.  Getting to try this cask-strength beauties gives you the same heady thrill, and satisfies the same sort of curiosity, as listening to Van Halen’s isolated vocal tracks on Runnin’ with the Devil.  What’s more, I’m pretty sure that I cried out with the same feral intensity that David Lee Roth did while enjoying myself this day.