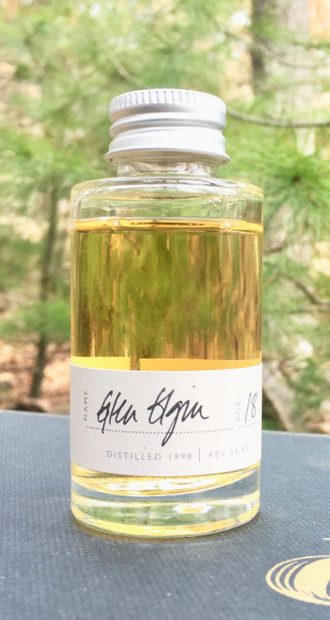 Tasting notes:
The nose on the Diageo Special Releases: The Glen Elgin 18yo, is oily and intoxicating; it feels like an olfactory invitation to the sort of party I never get invited to in real life. It promises mystery, a lifetime’s worth of anecdotes to dine out on, and an intense essential musk made from dahlias, peonies, sunflowers, and the grime collected on grapefruit juice sipped from a titanium sippy cup made by Boeing. Get it guys? Musk + Grimes! Guys? This is prettier than sunrise over the Andes.

And then, the mouth. Which, in a beauty contest of which I just elected myself the sole judge, trounces the pulchritudinous nose by dint of it’s explosive gorgeousness. It must be what a miracle tastes like; maybe if I were to take Communion and the wafer transubstantiated into a thin layer of flourless chocolate cake covered in raspberry coulis, I’d become a true believer. It’s hotter than Charlene “the” Dickens, who was Charles Dickens’ little-known niece. There’s also sweet honey in the rocks, a hint of roast chestnuts, and a soupçon of finding within yourself the wherewithal to (successfully) ask for a 55% raise.

The finish is robust and rambunctious, like a golden doodle puppy that keeps stealing your neighbor’s Blue Apron boxes and bringing them to you to cook. (You’d never train a dog to do that, would you?) It downshifts to manna from heaven after starting off as nectar of the gods…I guess if it’s descriptors you want rather than impressions, I’ll have to go with Zingerman’s Roadhouse’s  Georgia Grits n’ Bits Waffle, made with Anson Mill’s organic grits, Cabot cheddar, and applewood smoked bacon. If thou canst not findest the Glen Elgin, get thee to Ann Arbor for the next best approximation. Bright and citric, delicate and caramel-y, rich and fulfilling: It’s like a dessert souffle made from your happiest memories of the past 18 years, suspended in the matrix of the egg whites that were firmed into a superstructure by the heat of the love the Madonna holds for her Child.


Rating:
On the scale of songs by Charles Mingus–
The Glen Elgin 18 Year Old 2017 Limited Edition is All the Things You Could Be By Now if Sigmund Freud’s Wife Was Your Mother–I’d like to believe that this rating is self-explanatory…

…but as I was saying, this is actuality posing as potential and the instantiation is, simply put, perfect.