[We tasted this one when it first came out in 2016, but now that it’s gotten a wider release, we thought we’d revisit it.] 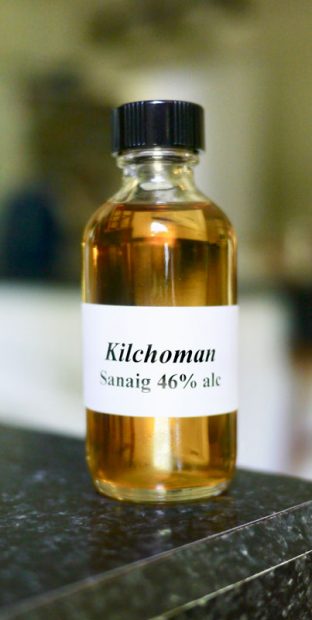 Tasting notes:
This noses up like a leather belt left in a cigar shop overnight.  Which is made to encircle a plate of bacon-wrapped scallops like a Florida Everglades python.  (I think it’s pretty clear that “sanaig!” is what I’d holler if I walked in on something that I mistook for a snake.)  But more than this, I get a peculiar smokiness.  Do they make their own peat?  There’s just something really distinctive here, as if they have supercollided clods of peat to yield new subatomic peat crystals.  Rain-soaked dieffenbachia leaves send up thick smoke as they sit on coal embers.  Roasted pine nuts, thrown by wedding revelers at the happy couple, still clattering down the marble steps.

The mouth is stunner on account of how immediately delicious it is.  It jolts you like a cap gun discharged during a Sunday School class on Paul’s first letter to the Romans.  There is all of the pepper and smoke you’d expect from that, but it also has a sheen of unctuousness, a candy tang.  We want to know how the claret taste gets in there on the back end.  Was it finished in red wine?  [Stephen: Says here there’s a good bit of sherry.]  Okay then, but surely it is an unusual sherry, right?  How to get that clear high note to tag along with the dark opacity?  Fig vinegar, sparrow marrow soup, and ebonite round out our impressions.

The finish starts in with dark molasses drizzled on tea cakes.  Then lots of vegetal stuff hangs like a cloud on the tongue.  It’s that peat again, I tell myself, and then I have a vision of a bog man wearing bandoliers of oranges when he fell to his death.  Our cigar store belt becomes an electric eel encircling Canadian bacon fried in Umbrian olive oil.  I wouldn’t jump out of a moving car to dance to a Drake song.  But I might just dive out for another glass of this.


Rating:
On the scale of facts about the taxonomy of electric eels–
The Kilchoman Sanaig 2018 Edition is the fact that electric eels are so unusual they are a family of one: Electrophorus electricus.  Islay is a pretty crowded place with lots of great whisky, but Kilchoman is finding a way to do its own thing and stand apart from the rest.

–Our thanks to Kilchoman and ImpEx for the sample!