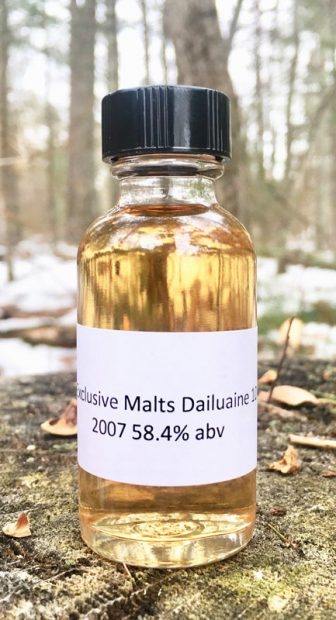 Tasting notes:
The Exclusive Malts Dailuaine 10 Year 2007, aggressively bids Two Clubs to open the annual Malt Impostor World Invitational Duplicate Bridge Tournament. I wonder if its hand can be that powerful, and catching a whiff, well, yes, it certainly has that paint lacquer daubed on urethane longboard wheels aroma going for it. Beware insects! My whisky hath become death from above for you. There’s also a box of No. 2 pencils used by high school sophomores for a string of fill-in-the-bubble standardized tests. As time passes, I’m getting roast pecans sprinkled over petroglyphs carved into limestone.

The mouth–ooh, that’s warming–brings a Song of Fire and Fire. There are flavors there aplenty, but since the better angels of my tastebuds are weeping from the high ABV, I’m going to water this down to see what emergent properties it has. Okay, that’s smooth now, like a Siamese rubbing against your calves. At your 10th high school reunion, a slingshot made from an almond tree sproings apple-butter coated Cinnamon Red Hots™ at that kid you always hated. Ping! Kill-shot, back of the head! He rubs his wooly ginger hair, bleating like an angry sheep who was just shorn. Revenge is sweet.

The finish has sugar, when it was a rare savory after being introduced by Crusaders come home, say circa the 12th century. There’s also post-orchid-nectar hummingbird poop, which is, if you’ve never had it, surprisingly good. What’s that Stephen? No, of course I’ve never had hummingbird poop! Anyways, it’s rich and smooth, like a pick-up artist who inherited his money from his carefree ne’er-do-well Aunt Clarissa.


Rating:
On the scale of things that get better over time–
The Exclusive Malts Dailuaine 10 Year Old 2007, is the body-identification of a driver with an automobile. At first, it’s tentative. But before long, you *feel* like you’re the car, and you know where all your boundaries lie. Now, just put the pedal to the metal and go!

–Our thanks to The Exclusive Malts and ImpEx for the sample!