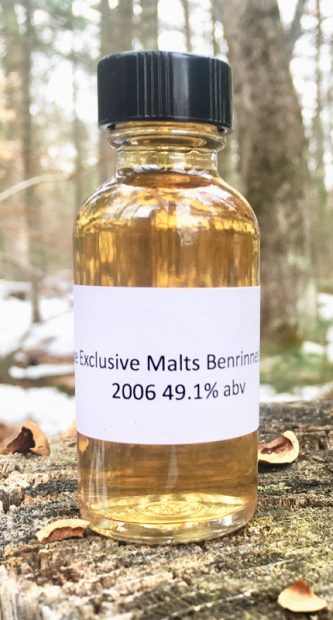 Tasting notes:
The Exclusive Malts Benrinnes 11yo, 2006, nose opens with a lilac and African violet posy, and yes, I know that African violets are more succulent than flower. Why do you think I used them as a descriptor? There’s also a freshwater pond boogie board ridden by a forlorn kid who doesn’t really get why ponds don’t have waves. There are willow twigs woven into a Panama-style hat worn by a Lapplander who is unrealistically afraid of sunburn. Vegan marshmallows grated into small pieces used as the sugar component of poundcake by a Lancashire county baker (Oi! I’m Fred!) who submitted it to Prince Harry’s Chief of Protocol, hoping against hope that he’d be chosen for a Royal Warrant and gifted the task of making Meghan Markle’s tea cakes. (He wasn’t.)

Yum! The mouth is cloying and coating, and explosively suggestive of an antique butter churn from Appalachia that never stopped being used…exclusively for smashing Nebbiolo grapes, Seville oranges, and native crabapples into the makings of a hard sangria monster mash. Ol’ Malty John impetuously (or petulantly?) pours the sangria over a flourless chocolate torte before my aghast eyes.

The finish keeps the party going like the infamous (wholly fictitious) EDM disc jockey ArianaGrandeMeisterFlush, who spins raves only on the 42nd  floor, or higher, of buildings in in mid-town Manhattan. Exclusive? You bet. There are troops of sourball butterscotch-lemon candies marching on a May Day parade down my throat, followed by a cyclone of chips of lump charcoal–hardly burnt–made of cherry wood, all held together by the palpable envy that your next-door neighbor, Ted, feels when you drive up in the Mini Cooper Michael Caine drove in the original movie The Italian Job. This dram is suave, but dangerous, like a James Bond wannabe parkour freak who just chugged four big-ass mugs of Cuban coffee.


Rating:
On the scale of very welcome developments in movie reviews–
The Exclusive Malts Benrinnes 11 Year Old 2006, is the ****SPOILER ALERT****–By which I mean, not that I have a spoiler to spoil a movie, but rather that I appreciate those reviewers who issue spoiler alerts rather than spoil movies. Rosebud was Citizen Kane’s pet ferret, Han Solo was Luke’s elementary school teacher, and Bruce Willis can’t act. The surprise ending here is ****SPOILER ALERT**** that the Exclusive Malt Benrinnes 11 is really, really good.

–Our thanks to The Exclusive Malts and ImpEx for the sample!