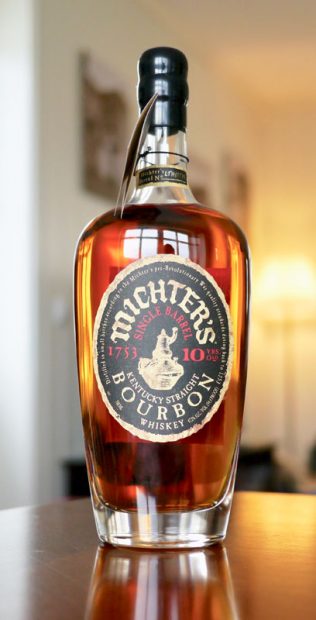 Tasting notes:
The nose on this wine-dark dram smells like the Dustbuster™ bags they used to clean up around the Iron Throne. You doubt me? Hey, I know a guy who collects really strange stuff, and these are a dead ringer for them. There’s tree bark made out of lemon rinds, peach skins used to make moccasins, and supernatural rabbits.  [Stephen: What?!?]  [Bill: Shhh, let’s see where this goes.]  Throughout I get the tall grass of a late summer meadow, much of it dried unto sallowness. In the distance a beautiful young woman, named Meadow, is walking toward her sister, Summer, and calling out that she’s going to be late. Late for what, I wonder.  [Stephen, to Bill: Ok, yeah, that was worth it.]

The mouth gives us plenty of rye, but there’s no mistaking the corn. Think of the corncob kazoos chorus that you heard at the state fair. They were performing the entirety of Rush’s 2112 and you got the clear impression that this was the sort of corn that might introduce itself as “maize.” It’s not too sweet, as can sometimes happen, and it has the pull and tug of a creamsicle melting on my tongue. Just take away the cold you’d associate with that experience, and redouble the creaminess and frosty abrasions, and it’s just as I’ve described. There are at least eleven herbs and spices, as if Colonel Sanders was behind this. But maybe it’s Kernel Sanders, and maybe it’s Red Sparrow rye being trained as a secret agent. Maybe.

What’s this on the finish? Peppermint rosemary? Or peppermint bay leaves. My mouth feels a bit like it has been freshly harrowed by a cranky dental hygienist. I am cavity free, but at what cost? Out of these bourbon ashes a rye phoenix rises up. Intricate and beautiful, it I quickly becomes a paradigmatic elicitor of the sublime. If only Edmund Burke had lived long enough to enjoy this! The finish lastly leads me through the darkened rooms of the intricately designed bedroom of Fievel the Mouse before the Czars were thrown out by supernatural rabbits.


Rating:
On the scale of Aesop’s fables featuring rabbits–
The Michter’s 10 Year Old Bourbon is The Tortoise and the Hare–The race is not always to the swift, indeed! And this is a bourbon to savor while in the slow lane.

–Our thanks to Michter’s for the sample!