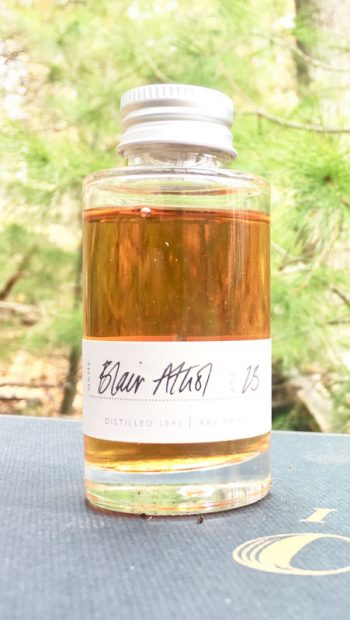 Tasting notes:
Welcome to this evening’s edition of Macabre Reviews. I am your host, Vincent Don’t-Ask-the-Price. (My middle name, for those fans who have written and asked, is “Especially-Not-With-This-One.” It’s a family name.)

This evening’s subject is the Blair Athol 23 Year 2017 Limited Edition. No relation to the Blair Witch Project, as it turns out, but it promises to be even more delicious. Just look at the color! It’s a dense amber that’s somewhere between the orange from the original movie poster for Halloween and the bright, stinging blood red from that of The Children of the Corn. Let’s give it a smell and a taste, shall we?

It smells of red velvet cake (always a favorite) cooked over mesquite until it was concentrated down into a single, devilish macaroon. It reeks of cherries of terror–or prunes set ablaze in an attempt to emulate a NASCAR crash with twisted, melting cars therein. Finally, it’s like waking up in a basement with a Victorian mahogany dresser that you didn’t notice the night before (exactly how you woke up with it, I’ll leave to your fertile imaginations). And the dresser is coated with lanolin furniture polish developed by an insane wood worker from a remote edge of the Dutch Antilles, who was known only as Joachin. Bwahahaha! 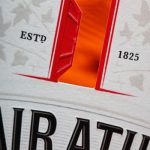 Behind the ominous Red Door (Look! It’s on the label, just above the name!), it is big, bold, and beautiful on the mouth: it’s a saucy broad named Sherry who’s a little bilious at first, but then surreptitiously conducts you down a dark alley, where the cherry terror from the mouth becomes a full-blown Sherry horror (in the best kind of way).  It’s wonderfully intense. It also tastes of butterscotch, but with a barely identifiable arsenic candy coating (of course).

On the finish, the syrupy quality gives rise to searing desiccation. Interesting, isn’t it, that few horror films are set in the desert?
[John: Wait, The English Patient scared the shit of out me.  That wasn’t horror?]
Anyway, that drying action plays beautifully paired with an entree of cherry-glazed duck breast. But on its own, it turns my tongue into a fajita plate at Chili’s, or the Spruce Goose getting hosed down with deicing material. Wow. Imagine seared tuna. Or a tongue seared to look like tuna. Whichever you prefer, horror fans.

Add water, and like something from The Twilight Zone, it only gets hotter! It’s like a tiny-grained cake (made with graphene flour in the lab of a mad chemist–in his daughter’s EZ-Bake oven) flavored with quince and served with a poison salamander on top. The effect is truly mind-bending. You won’t soon forget the delights served here. Thanks, Dr. Frank N. Furter!


Rating:
On the scale of classic horror films–
The Blair Athol 23 Year 2017 Limited Edition is Ringu–The Japanese film that gave rise to the English-language film, The Ring, is odd, wonderful, and terrifying. The grainy TV footage leaves plenty of room for the mind to do all sorts of terrifying work. It’s an utterly singular work that will stay with you for a long time.