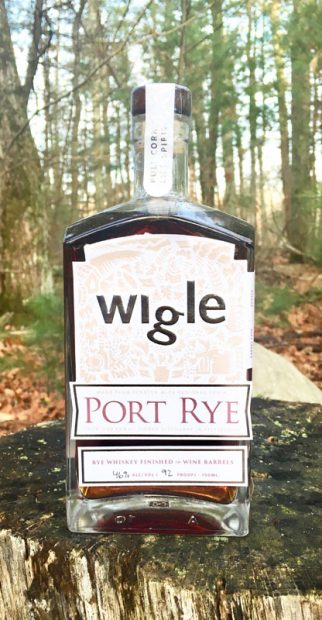 Tasting notes:
This dram really noses up like a rye from the start, but there are also notes of agate pebbles being smoothed by the waves that bash them into the beach and each other–and that beach abuts a field full of amber waves of grain. It’s a very deep red color, and the nose picks up on that theme as well: it smells like Virginia clay soil, or a liquefied cordovan belt set next to a partially liquefied pair of oxblood brogues, or what I imagine a pigeon blood ruby would smell like if I could just suck on it long enough. But that is just the Port talking. The pure rye bite sounds out over that sea of deep red and grabs your sinuses like a lasso made of dry vine and thorns, but if the thorns were fashioned out of ROLO® and if the lasso could make you feel like it was sterilizing your frontal lobes.

At first the mouth presents much like chewing the skin on a dried out avocado: it’s a little barky at first. It’s like a wheated rye, but with tea made from cherry pipe tobacco. Despite a couple of weird edges detectable on the tongue, it creates a smooth, melty, and amiable overall effect.

The finish makes you feel for a moment like you’ve just made it out of the Amazon and are chewing on a very special kind of bark for pain relief. There are strong hints of dark peppermints that hang around like a soothing cough medicine or a bank lollipop at the back of a junk drawer discovered two and a half days into an attempt to cut out all sugar.

Go back to the nose after a little while, and the Port explodes off of the nose. Allow this bad boy to open up: it will reward you handsomely.


Rating:
On the scale of famous ports of call–
The Wigle Port Wine Rye is Santorini–a favorite of cruise ships, this island in the Aegean Sea is striking to look at, in no small part because of the rugged terrain formed by a 16th century volcano eruption. It features cliffs and underwater caldera alongside iconic architecture and scenery. In other words, the explosive, volcanic aspects leave a few spots that might be rough for some, the overall effect is memorable bordering on iconic.

–Our thanks to Wigle for the sample!