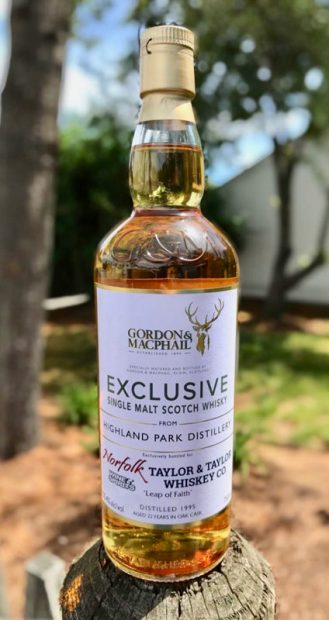 Tasting notes:
The Taylor & Taylor Whiskey Company, with Gordon & MacPhail Highland Park 22 Year Old, presented in collaboration with Norfolk Wine & Spirits, Cask Strength, 55.42abv, henceforth to be known as the TaTa, GoMa HP 22, opens with the very DNA of Highland Park double-helixed into my glass. On the nose, presenting with, as the curtain goes up. elk leather shoulder pads that were softened with mink oil, sable oil, Madagascar cocoa butter, baby feathery pinnate anise leaves, Meyer’s lemon juice, and the rendered marblings of Wagyu beef (imported from Japan) injected into yellow roasted heirloom tomatoes that were, post roast, sautéed in butterscotch consommé. There’s a high oboe note of clarified butter, too, as Beethoven’s Capriccio in Vaniglia in the key of Ghee might have begun with, had I not just invented it. Oh, and there are also the micro traces of micro ashes from a burnt original copy of the Magna Carta being snorted by a hedge fund billionaire, because he could.

The mouth’s body is toned and supple. Is it wrong to get excited by the tingly tactile titillations of the tart tannins touching my tongue? It’s wiry and whippy with a wicked uppercut, like a prima ballerina who chess boxes on weekends. Figs under rose petals under orange slices under gardenia petals under Cohiba cigars under the brim of Indiana Jones’ fedora under the tears of joy wept by Meghan Markle on her wedding day make for the most unique Seven Layer Dip ever brought to a potluck held at Bruce Springsteen’s house. There’s a hint of candy cane on Christmas morn at your grandmother’s house, back when the magic of the everyday transfigured everymoment into a galaxy of future possibilities.

The finish has that Highland Park burnt caramel, jingle-jangle spurs digging into the flanks of my throat—and the “flanks of my throat” are real, Stephen! Don’t you oppress me!—as we all go on a wild night ride in a troika with Clara Bow, Abraham Lincoln, and Dorothy Parker. (You haven’t truly lived until you’ve heard Parker murmuring aspersions to you as the two of you watch Bow and Lincoln two-stepping on the late-spring eastern European steppes. No, Stephen, I haven’t been taking Ayahuasca! It’s called ‘creative reviewing.’) I get also white Toblerone with small broken bits of salted smoked pecans marinated in motherlove. Or maybe Mother Teresa’s sweat.


Rating:
On the scale of palindromes celebrating crazy dreams becoming amazing realities–
The TaTa, GoMa HP 22 is A man, a plan, a canal: Panama!--Take it away, briefly, Wikipedia: The earliest mention of a canal across the Isthmus of Panama dates back to 1534, when Charles V, Holy Roman Emperor and King of Spain ordered a survey for a route…blah, blah, blah. (Doesn’t “Holy Roman Emperor” sound like something Batman or Robin would say?) It took 10 years to connect the Pacific Ocean to the Atlantic; it took 22 years for this Highland Park-distilled whisky to approach peak drinakability. I’ll take the TaTa, GoMa HP 22, thankyouverymuch!

–Our thanks to Nick and Zach Taylor of the Taylor & Taylor Whiskey Company, the Siegfried and Roy of the whisky world, for the samples!

[John: Bill! They are more like the Winklevoss twins than Siegfried and Roy! Or the Wright Brothers!]