Tasting notes:
The nose of the Highland Park the Light, a 17yo special release bottled at 52.9% alcohol by volume, is more layered than tiramisu. There’s seawater on sedimentary rock, slowly evaporating, leaving behind the olfactory memory of petrichor. There’s Jennifer Aniston’s Prada™ leather and canvas handbag, filled with a bit of juniper and a ton o’ anise. There’s passionfruit filling erupting out of hand-crafted dark chocolates that are being squeezed by someone who not long ago was thin-slicing onions and Morbier cheese to top a frittata. There’s honey made from alien flowers from an exoplanet brought back by the first successful interstellar probe—or maybe lilies. I couldn’t quite be sure, between the two. Guys, what do you think? Lilies or alien flowers? Guys? Guys?

The mouth is exceptional. It’s rambunctious pushing towards bumptious. It’s fireworks without the concussive explosions. It’s full, rich, and round. Resonant and orotund, it’s vibrating the tendrils of my nervous system like the Liberty Bell tolling the death of tyranny. It’s golden oranges that Jason missed while stealing the Golden Fleece. It’s coconut meat drizzled with cocoa butter, as well as pineapples and cherries plucked from a roast ham by a crack team of six hummingbirds who are the avian equivalent of the A-Team plus MacGyver. Dappled dabs of smoke and peat perfectly balance the fruit and richness as if HP’s Malt Master hit on a flavor/body/tactile trifecta at odds of 2,000 to 1.

The finish is a monster, but not the kind to be scared of. It towers over human pretension, asking nothing more than the chance to explore its own destiny separate from human fears and desires. There’s horse-rein leather and cured tobacco rolled into a spliff, using boysenberry fruit leather, being smoked by the world’s most ambitious Rastafarian. There’s a gong sympathetically vibrating along to an electric bass being played slap-style by a precocious kid who mastered P-Funk by watching YouTube videos. John got overripe macerated plums belching out of an oxeye daisy growing from his nose, because of course he did. Stephen said that he didn’t mind if his baby had a *really* hard time falling asleep, so long as he had a pour of the Highland Park The Light in his glass. 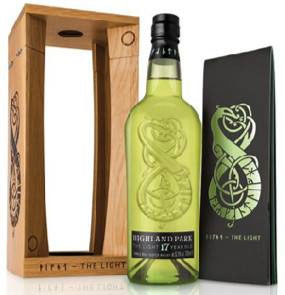 Rating:
On the scale of negative charges trending down meeting positive charges streaming up–
The Highland Park the Light is lightning–It connects the earth to the sky in a shattering climax, transforming the atmosphere, sending thunderclap shockwaves miles away. A bolt from the blue, the weapon of Zeus, untamed torrents of crackling anarchic electricity. Extraordinary.


–Our thanks to Highland Park for the sample!