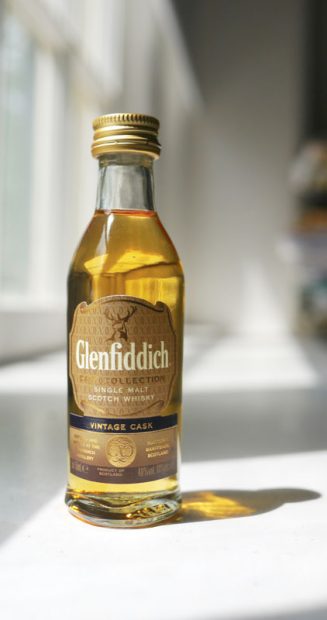 Tasting notes:
Feitheamh, dè? Have the Glenfiddich people taken a trip to Islay? Did they wake up one morning and smell the bog? I don’t know what led them to embrace peating…okay, remember: We’re impostors, and perhaps Glenfiddich has a long history of peating its Speyside creations, but it’s new to me. As the astute reader will have guessed, the nose opens with a not unwelcome dose of peat that may be covering a multitude of sins, including, but not limited to, eating haggis and brie cheese sandwiches, using a wet kilt as a towel, and playing bagpipes at 3am because the spirits moved you. We got a spinning top on one pan of the Scales of Justice, and on the other pan, the collected brimstone aromas wafting up like dry ice “smoke” from a death metal band’s laser-inflected performance. Unsurprisingly, the balance was precarious. For patient drinkers, blended Bermuda grass and giboshi emerge, weed-like, in your fancy-schmancy suburban lawn. Runny milk-sap dribbling from a pleated palm frond. (Yes, there’s an obscure Ronnie Milsap pun lurking there somewhere. So be careful.)

The mouth is *not* Islay-like peat; it’s milder and the Scales of Justice have balanced out. The verdict is in: Refined, but not vitiated. Could the peat be compressed and aged burnt almond torte? (No, but still it wouldn’t have surprised me.) Caught candle smoke, candied, and sold in neon mylar packets to unwitting youngsters. Suave and dangerous, like an idealized assassin.

The finish evokes weirwood tree roots fully penetrating my esophagus, a portent of vows that won’t be kept. It’s sweet, and fast, and light, like a Steph Curry three-pointer arcing up from a space-and-pace New Basketball play. This peat was accepted at both Princeton and Yale, but chose instead to go to the University of Arkansas, because it heard the M/F student ratio was highly favorable. It’s Peater O’Toole, not Peater Quill, and it could marry up–and it already has! Out of the bogs, into the university clubs and corporate boardrooms.


Rating:
On the scale of items inducing metamorphoses–
The Glenfiddich Cask Collection: Vintage Cask is Calvin and Hobbes’ Transmogrifier–To you, it looks like a cardboard. To you, it seems elegantly peated. To me, though, it’s portal to a new self.