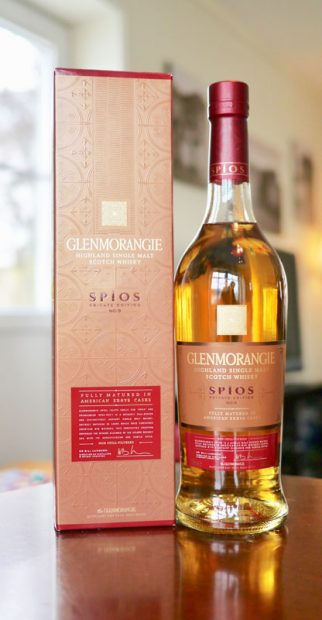 Tasting notes:
The nose on this curiously colored dram is floral and fruity.  I get blackberry tart baked by crows.  On the side is crème Anglaise made in Deutschland.  No, Stephen says, it’s lingonberry jelly spread across a Finn Crisp cracker by a pewter letter opener.  Wrong, announces Bill, it’s shrimp sautéed with kale.  Somebody’s hungry, I note, and we ignore him as usual.  But perhaps it’s instructive that the nose invites such a diversity of impressions.  Indeed, as our focus narrows again after a few sips, we find the nose to be more herby than flowery.  Consider a child’s dandelion bouquet in the maw of a show pig.  Or fresh, tightly-spiraled fiddleheads bubbling in honey-infused alpaca tallow.

The mouth has the beautiful mouthfeel we know and love from Glenmorangie.  I am convinced that Dr. Lumsden could conjure up such delights even in a barium phosphate suspension.  (If he ever wanted to join a team of bespoke radiologists, such is the cocktail he should prepare for the job interview.)  Think of cayenne- and sumac-dusted ghee into which shiny Jelly Belly candies are pressed.  Stephen said that when he furtively sampled the whisky on his own, he found that there were notes of green rye that needed to, in his words, “blow off.”  But I prefer to think that this brief unpleasantness was his punishment for starting early and blowing us off, as that aspect is nowhere to be found on this day.  Instead there is a pleasant, even delightful reediness.  There’s more reediness than a public library!  There’s more reediness than a box set of World Saxophone Quartet recordings!  (Stephen: “Bill, if we don’t move, this might stop.”)

The fun part of this dram is the finish.  It has more moves than James Harden at the top of the key.  Bill found that it avoided the palate, and set up its really long and spicy narrative on the back of tongue.  Stephen said it was like sucking on pine-needle lollipop.  What struck me was how un-Glenmorangie-like the experience was.  Normally the refined spirit steps forward and walks around my tongue in that prancy, fancy way that, we are told, medieval people walked around.   But here I can only conclude that the delicacy, on account of the rye cask, went the way of a “school of hard knocks” post-baccalaureate degree.  And yet the beauty of our ingénue is brightened, not dulled.  We kept returning to this dram as we considered its many-faceted marvels.


Rating:
On the scale of famous ingénues–
The Glenmorangie Spios is Mary Pickford–In 1909 alone, she appeared in 51 films.  This delicious whisky can also be a lot of different things to a lot of different people, all while possessing that star quality that makes it memorable.

–Our thanks to Glenmorangie for the sample!