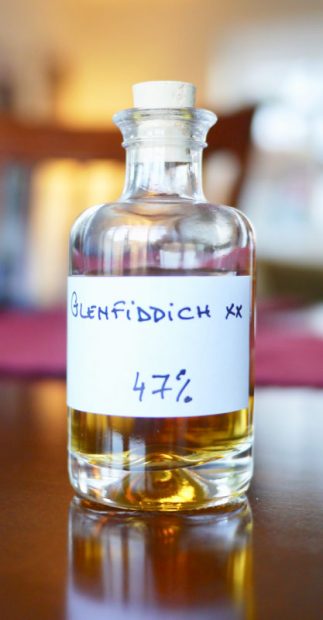 Tasting notes:
Here at MI Central, we opened the Glenfiddich Project XX files with some trepidation, knowing that the distillery could (and probably should) disavow us were we to fail in our mission. Our mission, which we chose to accept, is to drink delicious whisky and, uh, drink more delicious whisky. (Perhaps there’s a mission misalignment?) Anyways, the Glenfiddich Project XX clearly is designed to honor International Women’s Month—because XX is the chromosome type associated with most females. Well played, Glenfiddich!

[Stephen: Bill! It’s “Project 20″! As in the Roman numeral XX = 20! As in, twenty Glenfiddich brand ambassadors each picked a favorite cask from the warehouse, and the Glenfiddich Master Blender made magic with their choices!]

Well, that sounds like the most successful committee meeting ever. Anyways, the nose is redolent with wine made from fermented carrot juice, honeycrisp oranges, yellow prunes, and leather shoe laces from Clarks Desert boots. I got also bird nests made from manzanita twigs. Given the tensile strength of those twigs, those were some pretty determined and strong-beakéd jackdaws! With water added, it’s like an origami master folded seven cranes out of corrugated cardboard, and they then flew away. (But don’t add water, because if you do, it smells like cardboard.)

The mouth is like a pomelo brûléed by Janie the Arcwelder. (Rosie the Riveter’s considerably less famous great-granddaughter.) It’s sweet and acidic, like an heirloom tomato at the perfect amount of ripeness and a few dark-skinned, just barely under-ripe sloe plums plucked, then drenched with aged balsamic vinegar and light gold molasses. There’s coating, but no cloying, and speed skaters on willow bark blades doing laps on my tongue: The race everyone wants: Dionysus Ohno! Shani Davis! Eric Heidegger!

The finish has some bitterness, too, but it’s good bitterness, as if it were extracted from 85% Cacao single source chocolate and injected into taro root that I chewed at a luau. There’s some amazing unreleased Ricola cough drop lingering at the back of my throat, containing eucalyptus (of course), tarragon, menthol (naturally), jimsonweed, and the bottled hemi-demi-quavers of a champion yodeler.

Rating:
On the scale of psychological syndromes that the Glenfiddich Master Blaster —er, excuse me— “Master Blender” does NOT suffer from–
The Glenfiddich Project XX is the Dunning-Krueger effect–The Dunning-Krueger effect is when people of low ability possess a delusional superiority; they are literally not smart enough to realize that they aren’t all that smart. The William Grant & Sons Master Blender, Brian Kinsman, has crafted a superior whisky and with my totally illusory psychic powers, I know that he’s becomingly modest about it. At any rate, his blending powers are the opposite of delusional!

–Our thanks to Glenfiddich for the sample!