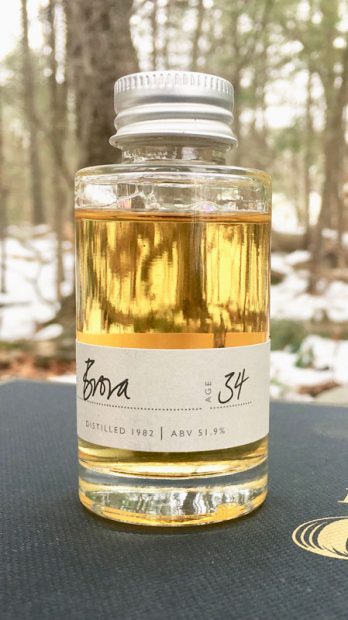 Tasting notes:
The redoubtable whisky opens with a whiff of smoke.  My first thought is that it’s the smoke of a magic trick.   This is a real abracadabra, presto chango kind of whisky.  To begin, there’s apricot nectar poured by a raccoon into a silver baby cup.  Then there’s a regal muskrat whose glands are overflowing with quintessence of ambrosia.  Finally, there’s unmistakable note of a horse saddle leather ashtray across the room.  Groucho Marx ground his cigar into it just before absquatulating.  Later, on the open, we will find gorgeous jellybeans, the sort that Cartier or Hermes would make if they were in the business of confections.

The mouth on this whisky is just, wow, it’s just…mmmmm.  (“Use your words, John”—Stephen). Right!  Well, I’m getting thick flower petals whisked into a fluff.  This is the center of a delicious cheesecake that cloys if you eat only the creamy center.  But fortunately there are other layers.  One is saw blades fashioned from mother of pearl and used to cut down bamboo stalks the thickness of schnitzel.  The other is the crust fashioned out of French tobacco and torpor.  All of this is to say it has a paradoxical heaviness-cum-lightness aspect.  Compare it to the spangled spheroids of mercury from a broken thermometer dancing in the bottom of a bowl.  More sips make for more delights.  Now it’s heather blossoms chewed interminably by heaven’s own cattle to produce perfect peat bricks from their cud.

The finish is brine from fresh water mountain lake oysters.  My gustatory apparatus is in full gear now.  But though my pulse is quick, the finish is slow.  I’m on class one rapids, out for a relaxing paddle and watching the dense, Amazonian flora press in all around.  Stephen claims that it’s like licking amethyst geodes, while Bill claims one of the three or four things he always claims (which have now been banned as “chestnuts”).  Not being in a position to judge either claim, I contend that the chewiness reminds me of hickory bark soaked in guava juice.  We are each in our own way contented.


Rating:
On the scale of the metaphysical properties of amethyst–
The Brora 34 is not the fact that it is composed of silicon dioxide, nor that fact that its hardness is seven on the Mohs scale, nor even that the purple color comes from manganese. No, we’re talking metaphysical properties. Thus, the Brora 34 “cuts through illusion” but also “aids channeling abilities.” Finally, it “enhances feeling of contentment, and a connection to one’s spirituality.” Yup, I can feel my crown chakra activating right now.