We’ve just learned of five upcoming events hosted by that dynamic duo, the Whisky Sisters. The details of time and place are below; they are barnstorming the bordering edges of the United States, bringing with them the good news of very good whiskies. Before your eye wanders down the page to see if you’re lucky enough to coincide with them in the space-time continuum, let us provide you with a few details about the concept of the tastings and about our good friends in drammage, the estimable Whisky Sisters. 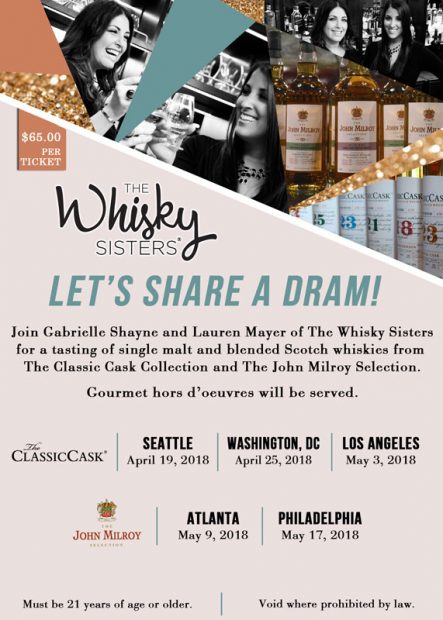 First, the Whisky Sisters: While I was growing up, I sharpened my connoisseurship on such demanding questions as: Hershey Bars, M&Ms, or the Nestlé Crunch? Sometimes, I’d go a different direction, pondering Chips Ahoy vs. Keebler’s. Or, were I feeling a wee bit crazy, I’d debate the issue of pretzel twists vs. pretzel sticks. By contrast, when they were growing up, the Whisky Sisters were being initiated into the family business of cask strength single malt Scotch whiskies and the Classic Cask offerings of succulent and innovative blended whiskies. I like to imagine that starting at a tender age, they were sent to their rooms without supper if they failed to identify correctly whether or not the particular note in question was more of a marzipan or rather that of an almond macaroon. Their whisky expertise is hard-wired into their nervous systems and their elbows bend upwards with the best kind of muscle memory. Beyond that, they spent years honing the craft of putting on great Scotch-tasting events when they ran the SMWSA Extravaganzas, which, if you faithfully read our site, you know we love. ❤️❤️❣️

These five tasting events are relatively small—they’re limited to about 100 people—and the idea is that they’ll provide a setting for a smaller, more intimate chance to get to know either the Classic Casks or the John Milroy Selections. The size allows for tipplers to talk leisurely with each other about their tasting experiences while avoiding being overwhelmed by the dread modern feeling of FOMO, the Fear Of Malting Out. There will be plenty of time to savor drinks and food without rushing hither and yon from one table to the next. Moreover, the Whisky Sisters will be there hosting, dispensing insights, and generally enlivening the proceedings with their warm conviviality. There will be gourmet hors d’oeuvres, and yes, you should nosh them aplenty to lay down an essential base layer of food. We’ve found by so doing, it’s much easier to fully enjoy the unlimited tasting of 14 single cask or single malt or blended Scotch whiskies from the Classic Cask line or, at the other events, the tasting of 12 single cask, single malt Scotch whiskies from the John Milroy Selection.

One last pitch for these events, folks. The price for a ticket is a very reasonable $65. Going out for good drinks and appetizers at a bar runs up a steep tab mighty fast, and mob-scene tastings cost $175 and up. (Earlier this year, Stephen had to sell his kidney to afford going to the Whisky Exchange 2018 Old & Rare Whisky Show in Glasgow. It was worth it, Stephen, wasn’t it? Stephen? Stephen? Stephen?)

They’ll be hosting The John Milroy Selection tasting in Atlanta (5/9) and Philadelphia (5/17).