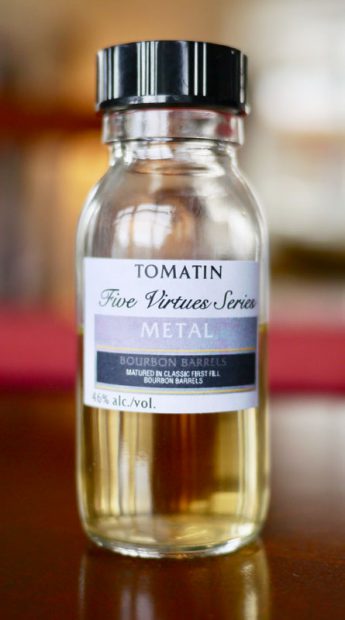 Tasting notes:
This whisky is part of a limited edition series called Five Virtues (we’ve also covered another expression in the series, Water). It is a collaboration between Tomatin Distillery and artist Eva Ullrich. The Metal is meant to showcase the Tomatin stills by featuring the classic Tomatin style (and presumably lots of contact with the metal from those stills).

The first fill Bourbon barrels used to mature this whisky play prominently on the nose: imagine tropical fruits bursting from their flowers right before your eyes–in a way that’s not at all terrifying. There’s coconut and mango on the nose, along with an oiliness, like that from an exotic sun tanning oil just sprayed on a vacationing Olympic athlete.

That same sun tanning oil presents on the mouth and is remarkably smooth and not at all hot: it’s like a pulley with bearings made from Super Oilite® are lowering the liquid effortlessly across my palate and down my throat. It is beautifully light, and as it opens up on the palate, it gains more and more power. A mineral-y note, which is almost certainly that of chert, shows up in there as well and fits in comfortably with all of the fruitiness–as if lounging in the adjoining deck chair. Damn, I could drink this all day.

The finish sings out notes of pineapple and a mineral, chalky spice. But for all of the luscious oiliness, it would be flinty like a Pouilly-Fuissé, but with more power to refresh. This dram could moonlight as a summer cocktail, especially if it first made friends with some mint and a couple of cubes of ice.

Rating:
On the scale of notable things to jot down in a journal–
The Tomatin Five Virtues Series: Metal is making a note to buy Tomatin aged in first-fill Bourbon barrels–This is something to keep in mind, file away, record for posterity–whatever it takes to make sure it isn’t forgotten. Readers, take note.

–Our thanks to Tomatin for the sample!