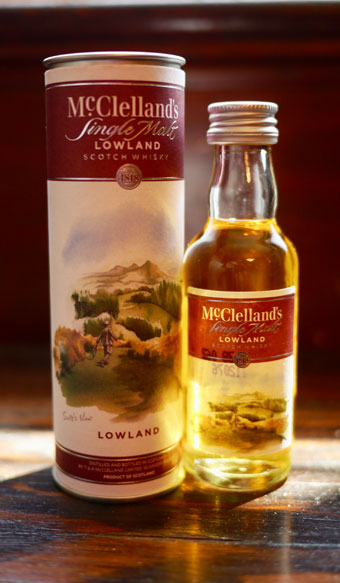 Tasting notes:
I was prepared to expect the worst from these entries, but my low—no pun, truly—expecations weren’t met. (Does this mean it’s better than awful or worse than awful? It’s ambiguous, isn’t it?) The dram noses as if a solution that was 85% paint thinner and 15% crabapple juice had been held for some months in a container crafted from fresh-cut pine plywood with a cork fashioned from tire treads that lately had been employed as the soles of huaraches fashioned by indigent children in Mexico City to sell to slightly less indigent children in Mexico City. There’s an odd fruit, too, as if peach pits that failed to produce laetrile had been mouldering in the paint thinner. As time passes, the peach pits and pine are more pronounced, mercifully, and the thinner and tire treads evanesce.

On the mouth, as weak as the 40% abv would have led me to believe. But, even given that, a rather benign, mildly benighted sense that the rigorous controls enacted by the Scotch Whisky Association haven’t been circumvented here: It tastes like Single Malt Scotch Whisky (of dubious provenance) that indeed has been aged in a barrel for at least three years. Which is to say, I am alive, I like whisky, and drinking this is akin to learning that your wife, who just spent 50 hours delivering octuplets, learned that the last of the eight to pop out had a birthmark that read “999”—or was it “666”? Which is to say, maternal instinct kicks in and she still loved that eighth child, preferring to believe it was the former numeral and not the latter. The mouthfeel is pleasant; just on the correct side of cloying.

The finish is smooth and undistinguished, much like a C-list character actor in Hollywood who is called upon to play toffs in non-prestige period pieces. If you are in a rush, and never stop to smell the roses (or the McClelland’s Lowland), the mouth and finish paradoxically reward your impetuousness, gainsaying and belying the old saw about smelling before you leap.

Rating:
On the scale of locutions that seem fitting–
The McClelland’s Single Malt Lowland Scotch Whisky is Damning With Faint Praise— Have I damned this whisky with faint praise? Is my praise so faint that the whisky is damned or have I damned it such that at most it will evoke faint praise? Another enigma to ponder.