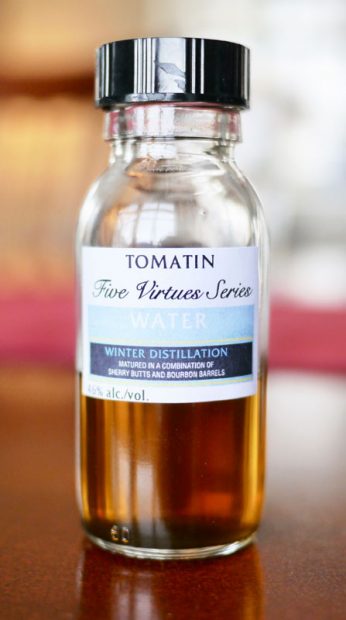 Tasting notes:
This whisky is part of a limited edition series called Five Virtues, marking a collaboration between Tomatin Distillery and artist Eva Ullrich. The Water is a winter distillation, so termed because of the “reduced interaction with the copper stills” (which I assume means that it’s the product of a shorter overall distillation time).

The nose betrays a heavy spirit, and offers a strong hint of copper, delivered on a pillow of very light Sherry funk. But to be clear, this is copper that’s just beginning to patina slightly, not the copper of an old penny you sucked on for three hours (and yes, there’s a difference). This whisky, then, offers a cool paradox: less interaction with the metal yields more metal flavors (SPOILER ALERT: there’s metal on the finish, too).

In light of this, it also might seem strange that this one is called Water, given that another of the Five Virtues, and a whisky I will review soon, is the Tomatin Five Virtues: Metal. But apparently the name isn’t about the flavor so much as the processes involved in making it; and in a whisky given shorter distillation time, the natural mineraly character of the water the distillery uses (from the Alt-Na-Frith burn) plays more prominently.

After a little time, the nose opens up to chocolate, delivered on that same Sherry funk pillow, only it’s more ethereal now, leading one to wonder how it holds up the chocolate like that. Soon, it gives way to a rich amber note that turns out to be a preview of the mouth. On the mouth, it’s full and meaty, like Chunky™ Soup really should be. At first, the nose belies a metallic harshness that never materializes in the mouth. The flavor profile here is triangulating perfectly between leather, attenuated pipe tobacco, and a bowl full of licorice.

OK, now, the finish is like sucking on a penny: it’s hard and tannic, like the penny had been soaked in lapsang souchong tea for two years before you started sucking on it. Wow. It’s clear there’s oiliness here, too, but once it’s passed the gullet, it’s more metallic than oily, unless that oil came from the engine of a 1975 Chrysler Cordoba. But not so oddly (this is a true winter dram, after all), that tannic, metallic finish just makes you want to drink more of it–at least on a cold winter’s night.


Rating:
On the scale of iconic advertising lines–
The Tomatin Water is fine Corinthian leather— Ricardo Montalban delivered the line like no one else ever could, and he did it first to sell the 1975 Chrysler Cordoba.

–Our thanks to Tomatin for the sample!