Tasting notes:
Having lived through my first winter in Norway (I’m still living through it, to be honest), it is appropriate that writing up the review of this whisky falls to me. Dark, stewy whiskies like this one have helped get me through the long nights that, at their worst, start at 3:30 in the afternoon and end around 10:00 in the morning. I tried some bright and fruity ones as well along the way, but I can assure you, they do not do the trick. If you’re looking for brightness and lightness to help you deal with the dark, get a light therapy lamp (and take your Vitamin D).

Did I say the Dark is a stewy whisky? The nose presents with the kind of braised beef stew that they put raisins and plums and other luscious fruits in back in Dickens’ day. The nose is a dominating one, like that same stew would be in Bob Cratchit’s humble abode—or like a Sumo wrestler would be in any room in that home. The fruit notes get rounder as you nose it and eventually become a perfectly round melon bowling ball rolling down to split the pins of my metaphors.

The mouth is using tannins to tan my tongue like a hide on the prairie. It evokes notes of Assam tea, which in this context seems like it must be an Indian name meaning Awesome tea. But there’s also beef tallow soaked in that Assam tea to make the world’s most striking tater tots or to staunch the bleeding from exit wounds in a blue-blood gang battle. Just when you think you have the notes down on the mouth, fenugreek runs across the palate like a streaker across the pitch in the Rugby World Cup: it’s confused and senses the danger, but still relishes its moment in the spotlight.

The finish is huge and bold and lasting. It’s a targeted Sherry missile with a destruction pattern like an intricate quilt. I don’t know how to explain it beyond that, because that descriptor is perfectly on the mark.

Add some water, and a strange alchemy begins. Sea monkeys blossom alongside hybrid limons, inside a real princess’s tiara. Damn, it just sparkles. On the tongue, it’s like being treated by a small army of tiny acupuncturists using knitting needles. Tarry notes attached to the peat come out as it cruises into the finish. This 17 year old is a gorgeous beast that will help carry you through the dark days. 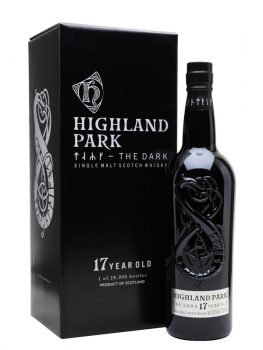 Rating:
On the scale of haunting childhood associations with the Dark–
The Highland Park The Dark is a grue–Though the idea of a predatory creature who operate in the dark dates back at least to the writings of Robert Louis Stevenson, my first encounter with a grue was on the early (all text) computer game, Zork (and this is what it said on the screen):

It is pitch black. You are likely to be eaten by a grue.
Further investigation will reveal more about their nature:
> what is a grue?
The grue is a sinister, lurking presence in the dark places of the earth. Its favorite diet is adventurers, but its insatiable appetite is tempered by its fear of light. No grue has ever been seen by the light of day, and few have survived its fearsome jaws to tell the tale.

A child’s imagination meets that description, and he gets a hell of an association. And one that sticks with him for the rest of his life.