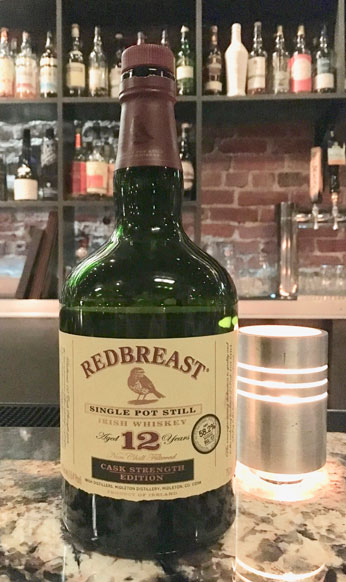 ​Tasting notes:
For some, our style of “tasting notes” are, well, at best a bit obtuse, and at worst rather inaccessible. And that provokes a question that I’ve often chased back into some dark corner of my mind, but which, here and now, I entertain: Why write in such a way that a good number of people have no idea what the hell you’re talking about?

Now, I am aware that some of you out there are inured to our writing, while others are, Stockholm-Syndrome-style, even beginning to like it. But this review is not for those poor souls. This one is for the guy off the street looking for a simple whisky review:

This is some really good stuff. And despite its being so hot (in terms of alcohol by volume), it is considerably better than the regular Redbreast 12 Year Old, even though we’ve never reviewed it (but not like many of you could have discerned what we thought of it if we had). This is truly an iconic Irish whiskey. That said, it’s no 21 Year Old Redbreast, but really, few others are. Actually no others are. That’s why it’s the 21 Year Old. Just forget about that and go enjoy a bottle of the Redbreast 12 Year Old Cask Strength Edition, if you can get your hands on one.


Rating:
On the scale of really good stuff–
The Redbreast 12 Year Old Cask Strength Edition is right up there–Sure, it’s platitudinous and basically vacuous, but this is what you want, right, guy-off-the-street? What’s that? You say you’d prefer there be some clickbait after the rating as well? Well, don’t say we never delivered.