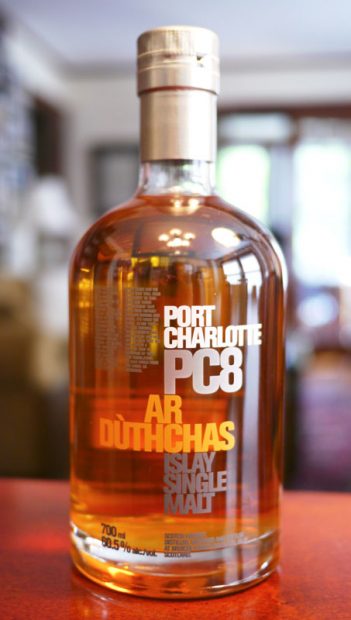 Tasting notes:
The Port Charlotte 8 noses like a late 1950s cello made from cherry wood by an existentialist experimentalist French Luthier (named Luthér or Gauthier or something) played by the crossdressing Jo Jo Dad, a Las Vegas Yo Yo Ma impersonator who specializes in playing quinceañeras. (You guys got that, too, right? Guys?) When in New York, he’s off Broadway; really, he’s Off Off Off Off Broadway. Anyways, if Charlie Daniels of the Charlie Daniels Band wrote a song called “The Devil Went Down to Las Vegas” about Jo Jo, it would include lines about smoke blowing out of the f-holes, and instead of brimstone, fermenting childhood blankets in high school chemistry labs. Stephen got Zach Galifianakis between two fern bars, because of course he did. With water, faint hints of Pine Sol© smelled through hospital corners after loosening the pleather restraints. (What restraints? you ask. Better not to ask.)

The mouth is The Handmaid’s Malt: So tawny, so…wearing red hoods and white wimples? (John, WTF R U drinking? Your notes are getting didactic again.) Long and tingly like drinking the electric eel at the bottom of a mezcal bottle. We are convinced that the mouth and nose so distinguish the Port Charlotte 8 from the other expressions that Jim McEwan will reveal, posthumously, that they came from different distilleries, and that the whole enterprise is some kind of crazy longitudinal experiment studying children who need to have attention paid to them in utterly different ways.

The finish is LONG and powerful, like Dicke (Big) Bertha, shooting giant shells of gardenias at baffled poilus and doughboys. Menthol eighth notes, like a delusional chocolatier selling mentholated 85% Peruvian cacao bars, and the leftover effects of misfortunate CRISPR goofs on the epigenetic code by a spritely assistant filled with ambition and bad ideas. Champagne, minus the yeast.


Rating:
On the scale of fictitious sports channels as seen in the movies–
This Port Charlotte is, naturally, ESPN 8, The Ocho, from the movie Dodgeball–“If it’s almost a sport, we’ve got it here: ESPN 8, The Ocho!” It’s exists only in movies, but it’s real! Port Charlotte isn’t really a distillery–it exists only in memory–but here it is: The fabulous PC 8 that you can’t buy in any store.