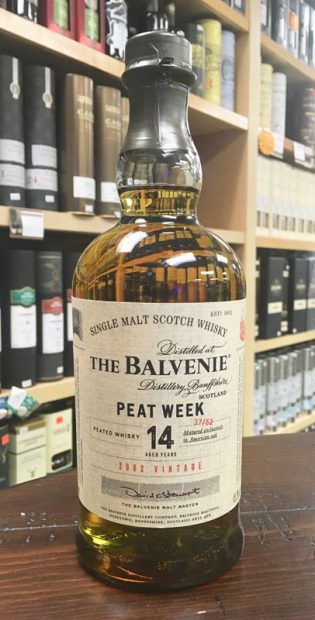 Tasting notes:
The nose on this Peat Week expression is unmistakable. It’s matchsticks, but the kind whose sulfurous heads have been replaced with cotton candy braided into monkey’s fists.  For it’s a high sweet smell that, along with smoke, pulls me in completely.  [Bill: “Incompletely?”] No, it pulls me in…completely.  I’m like, totally pulled in. [Bill: Wait, so first it’s an incomplete pull, and then it’s a total pull.  Which is it?  What am I missing?]  Your front teeth if you keep this up, Bill!  Anyway, so, um, unlike my state of mind at this very moment [glaring at Bill], this nose has the conspicuous balance I expect from Balvenie.  Though the tea-darkened label cries out that there’s something unusual here, something unBalvenie-like, perhaps even some indescribable menace in the gloaming, it isn’t the case; it’s all balance and delight.  How is it possible?  I mean, they put an entire week of peat in here, and yet I have to say they did so with utmost deliberation, with nothing upsetting the Balvenie symphony I am accustomed to.  [Stephen: Um, I’m pretty sure there is not ‘an entire week of peat’ in this whisky, whatever that even means.]   Dammit, guys, just let me say what I need to say!  Because I’m finding in the nose a shiny lemon peel sitting in a cloisonné dish, orange pearlized paint on a toy dragster funny car, and a mother-of-pearl pistol grip on a blued steel handgun.

“Oh, the mouth!”  I start speaking before I even swallow, which means I’m now dabbing at Balvenie droplets as they sink into my merino wool Scardigan.  My delight centers on the delicious, bright, and really beautiful gustatory sound stage.  For all of the pleasure in the nose, it did not betray the comeliness of the mouth.  What then followed was series of speculations about how the peat could yield up something so nice.  There was chatter about terroir (and the thought that Speyside peat was not as medicinal as Islay owing to a greater number of placebos), discussion of early man (did bog people carcasses occur in greater numbers due to migratory patterns along what would later become the A9 highway?), and a long, almost miserable discussion of whether mastodon jerky would have umami flavors.  This threatened to become digressive, but we found that our appreciation for the whisky only deepened.  It was, after all, the kind of whisky that could bear up well under conditions of misunderstanding, deliberate or otherwise.  (Note to self: bring this to the Malt Impostor corporate retreat!)

The finish serves up sliced fruitcake fanned like a peacock’s tail, with a bright candied cherry serving as the distinctive eye on the end of the feather.  The fruitcake was made by my great aunt whose ornithological ambitions were quashed by her small, ill-tempered husband, Uncle Reg.  So she used all of the best rum, only Harry and David apricots, and a bit of radium to make the luminescence just right.  The finish helps to sort out one aspect of the mouth I’d failed to appreciate when Bill was expounding on whether mastodons would enjoy eating mastodon jerky, and why this says nothing at all about the moral character of such animals.  For now I’m able to see that there’s a bit of an arm wrestling match going on between caramel and mineral dimensions.  As one who likes his sweetness to be leavened with some tanginess, this was a most welcome callback indeed.

–Our thanks to Balvenie for the sample!