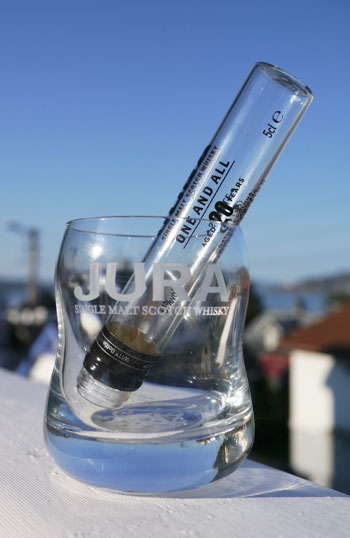 This whisky was so good, it didn’t last until the photo was taken.

Tasting notes:
The nose of the Jura “One and All” 20 year old limited edition opens with a veritable Josephine Baker’s hat of grapes and raisins, prunes and plums, mangoes and dried mangoes, and apricots and dried apricots. (Yes, John, I know I used that descriptor five years ago. Deal with it.) Reading the information enclosed with the sample made it clear why the fruit cornucopia spilled out of our glasses: One and All is matured in ex-bourbon barrels and “specially prepared with Jura aged in” a variety of wine barrels and Sherry wood. We also found freshly sanded knotty walnut wood paneling covering the walls of a room in which a squad of tuxedo-clad, white-glove wearing waiters were dancing minuets and the lobster quadrille while bearing silver trays loaded with food and beverage. Some held Christmas cakes and urns of a special edition Starbucks toffee coffee. Others held candied dates, randy plums, and cheeky cherries. One held an incense burner producing wisps of an exotic pipe tobacco bought at Trader Sanjay’s in Delhi. The last held a marzipan Marie Antoinette wig originally made for a Decameron-inspired party to count down the days until nuclear oblivion.

The mouth found more fruits; a luscious mix of migratory coconuts and pineapples, moving cross-continent, seeking to become invasive species. There were also golden Viking helmets and Brillo™ pads made of supple green osier twigs and bay leaves. This potpourri—this stew— was held together by a framework of cough suppressants concocted by medical designers whose focus was more on achieving an incandescent trellis of joyful music than on the quotidian work of anesthetizing vocal cords.

The ultra-long finish was, retrospectively, unsurprisingly winey. It was also velvety and smooth as Sunday morning.

There was a robust and rumbustious cinnamon-smoke extract painted on our lips and uvulas. Or is it uvulae?

[Stephen: I never liked you, Bill.]

The insides of Stephen’s upper cheeks were the place of amazing sensations, not unlike being filled like a chipmunk gorging itself on quesadillas, and granting him the faintest glimpse of what it was like to be Gary Coleman. That’s not the same as knowing what it is like to be a bat, but it’s a start. With deep reluctance I added water; I didn’t imagine that it could get any better. And I was right. However, it did release an authentic Cajun gumbo, set at a rolling boil on a magnetic-induction stovetop in a cast iron Dutch oven that’s been in continuous use since 1990. Let them eat okra and andouille.


Rating:
On the scale of supremely satsifying rivers of ingredients that flow together and result in an extraordinary outcome–
The Jura “One and All” 20 year old is cassoulet–It takes a village to raise and acquire all the kinds of things that go into the pot, and it takes days to cook into sublimeness. Hearty, chewy, mouth-melting, spirit-sustaining transfiguration of the every day everything into the one and only one and all, all for one—if you’re the only one drinking it.

–Our thanks to Whyte & Mackay for the sample!