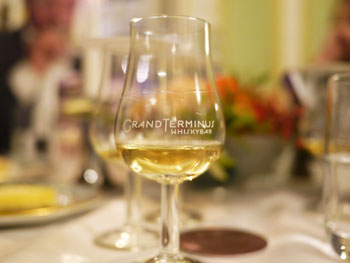 On Halloween night, or as the Norwegians call it, 31 Oktober, I had the special privilege of attending a whisky dinner celebrating the Diageo 2017 Special Releases at the Grand Terminus Hotel in Bergen, Norway. The dinner was hosted by the Bar Manager for the Grand Terminus Whiskybar, Øystein Hole Didriksen, and presented by Diageo Senior Nordic Brand Ambassador Mikael Lundén, and both did a wonderful job putting on what was a beautiful event.

Øystein welcoming the guests at the Whisky Bar

The pre-dinner drink was a twist on a Sazerac, which the bartender had deemed a “Craggarac,” since he used Cragganmore instead of a rye whiskey in the recipe. Needless to say, it was a Diageo whisky night. The result was a sweeter overall profile, but the spice of the Cragganmore performed well in place of a rye. 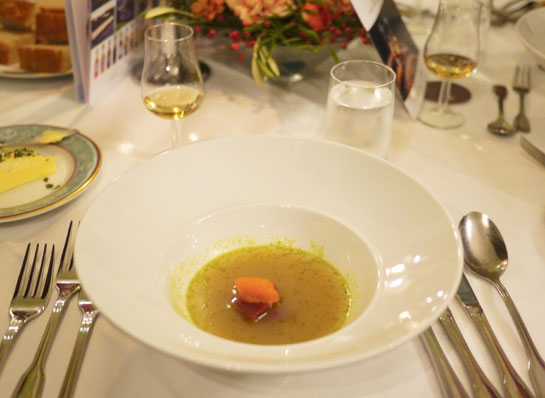 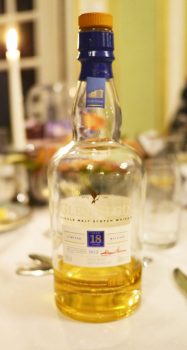 The five courses of the dinner were paired with five of the Diageo 2017 Special Releases. (Particular expressions from the 2017 Special Releases did not make it into the lineup here: the Brora, the Port Ellen, the Port Dundas, and the Convalmore. But of course, those are the rarest and most expensive members of this little club, and had they been present, the dinner would have cost a fortune.) The pairings sometimes offering a complementary set of flavors and other times aiming for more similarity between the whisky and the food it accompanied. All of them worked very well, but pairings that contrasted flavors tended to surprise and satisfy me more. The first course, for example, featured a mussel soup with tuna and sorrel oil, which was served cold. They brilliantly paired this soup with the nearly syrupy sweet Glen Elgin 18. The brine of the soup, the fat of the tuna, and the earthiness of the sorrel sang out as if in a choir of loveliness up against the fruitiness of the Glen Elgin. It was an inspired combination. 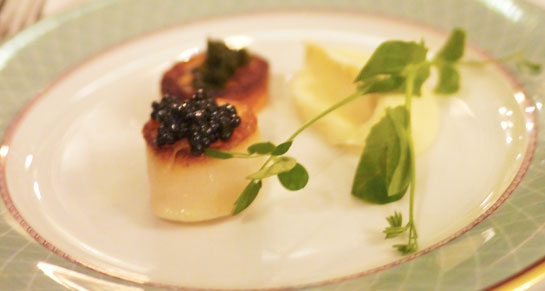 The next course paired a Teaninich 17 with a scallop compositon with king crab, celery purée, sugar kelp and trout roe. The dark sherry richness and tannic depth of the Teaninich especially brought out the brightness of the crab, for some reason, but overall made a lovely accompaniment to the seafood dish. 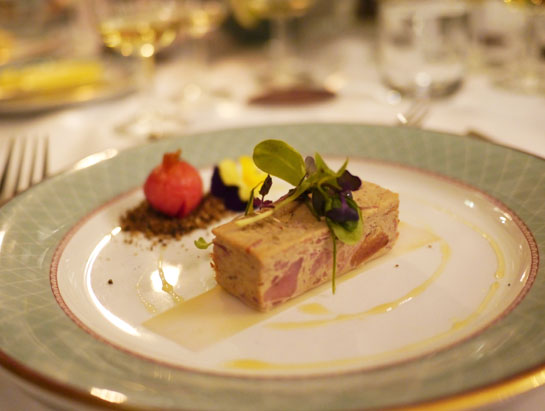 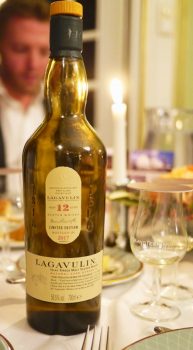 Course three was a foie gras and pork tenderloin terrine alongside pickled vegetables with Tahitian vanilla, malt and whisky syrup, and they paired this one with the 2017 Edition of the Lagavulin 12 Cask Strength expression. I had never liked terrine, mostly because I never understood why one would take perfectly good ingredients and force them into a meat mold, usually with gelatin. So when this one was announced, I tried to focus on how happy I was to try the new Lagavulin 12. When the third course arrived, I smelled it and found it smelled like terrine. So I smelled the Lagavulin 12 again. When I tasted the terrine, however, I was glad that my skull was intact, because otherwise, my brain might have blown right out of my head. This was a classic pairing of similar flavor profiles, but the pork and foie gras combination was simply extraordinary with the Lagavulin 12. I ended up having a sip with every bite, just to maximize the effect. 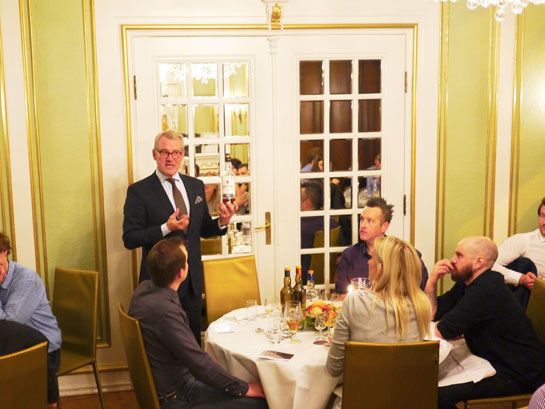 Next came a Blair Athol 23 paired with a duck breast marinaded in honey and lime with red cabbage and a cherryglacé, which turned out to be a cherry flavored demi-glace. This was the Christmas dish I never had at home and never will. My goodness, it was the essence of a festive dish, and the Blair Athol went with it so well, the food and the whisky just melded into one deep red fruit pool of richness. All of that said, however, it might have been my least favorite of the pairings, but one of my favorite dishes and one of my top whiskies. When the pairings are this good, you can have a least favorite like this. 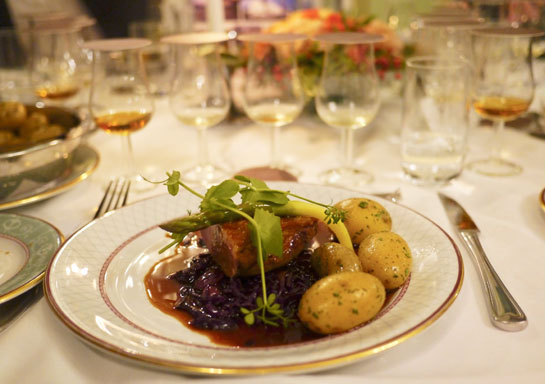 Finally, they served the Caol Ila 18 with a dessert course of chocolate delice made of heavily smoke chocolate with roasted almonds, biscotti, pistachio ice and salt caramel. This new Caol Ila, I should note, is another unpeated gem, forcing me to ask the question I and my fellow Impostors have asked several times before: “Why in the hell do they peat this stuff?” The smoked chocolate was to die for, but it nearly obliterated my ability to taste—or want to taste—much else, so the pairing was a good one, but it was again more about the component parts than the combination in that particular case. 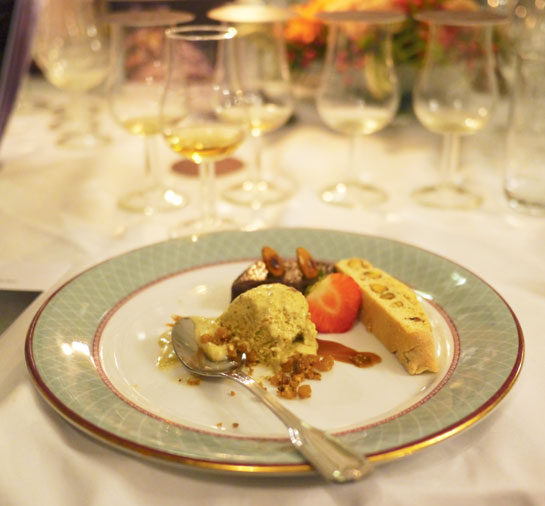 The dinner party adjourned to the bar, where there was coffee and an after-dinner cocktail, a Talisker sour. This version of a whisky sour had a hint of another cocktail I love, the penicillin, in it. While that was probably just the peat of the Talisker, I did not mind one bit. It was a perfect way to end a sumptuous and eye-opening evening.

For those who think one should not try to pair food and whisky, this dinner represented perfect counterpoint to that view, a blueprint for how to think about pairing whisky with food. Overall, Øystein and Mikael did a great job of organizing and putting on this culinary show, and the setting was indeed a grand one. It was an event worthy of the rare Special Releases it featured. 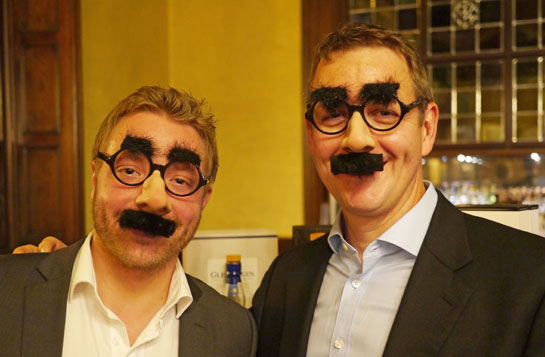