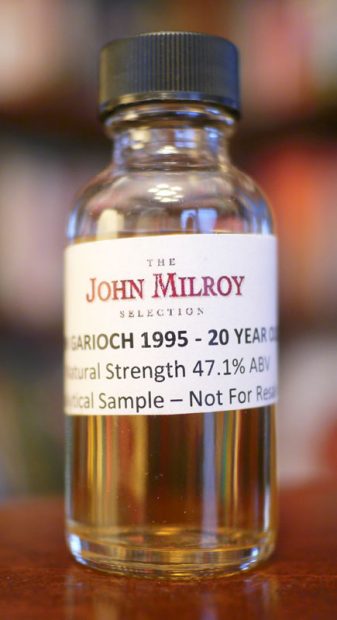 Tasting notes:
The nose reminds me of my visit to a hydroponic ficus sanctuary.  I wondered why these trees would seek asylum, but before I could figure out an answer I could hear a triangle chiming out in anticipation of dinner.  What followed next was a feast that became curiouser and curiouser​.  Such is the variegation and multitudinousness of this fine cask selected by John Milroy. That’s when the beewax-shellacked floor of a dollhouse struck me.  Before I knew it, a leather-helmeted flying squirrel strapped to a glider flew overhead.  Splayed in a posture that can only be called “the passion of the Christ,” the squirrel was sent over clover fields buffeted by dry desert sands.  I watched him fly until he was a tiny speck.

The mouth is big for its size.  There is salted lemoniness that gives it a biting piquancy.  But then sweetness redounds like volcano valley echoes.  What I mean by this is that it assertively fires on the tongue for a long time.  Lacquered cantaloupe quarters, smoked paprika, ceiling fan grease, but above all of that: hot oatmeal with a thin layer of sugar cookies on it in a child’s attempt to reproduce a crème brulée.

The finish is at first an extension of the mouth.  It is as if a filmmaker, keeping the camera still and the lighting unchanged, indicated the change of scene solely with a subtle hammered dulcimer flourish.  The cereality of the mouth now ventures rightward toward the pumpernickel spectrum, while on the vivacity index, the overall movement settles somewhere between “sloth” and “glacier.”  I get it now.  The finish is a squatter and aims take up residence in my palate.  Alarmed at first, I start to google about the legal difficulty of undertaking gustatory evictions, until the folly of my plan hits me with full force.  This dram has found the pocket like bass player, Paul Chambers, and so I sit back to enjoy the groove.

Rating:
–On the scale of rock musicians with proportionally large mouths–
The John Milroy Glen Garioch 1995 20 year old is Steven Tyler.  Dream on!