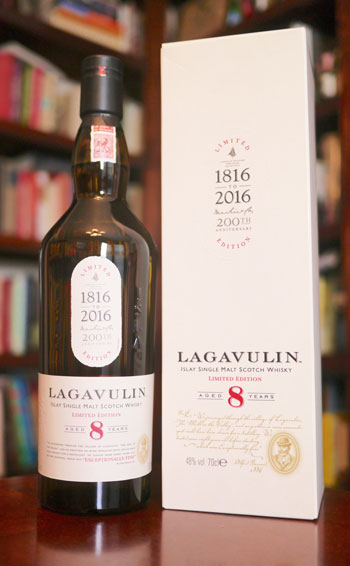 Tasting notes:
I’m a little late on getting this review out, but given that one could probably still find bottles of this floating around (I found one recently in a bar where I hadn’t expected to see it), it’s not that late. Also, this Lagavulin, designed and released to commemorate the 200th anniversary of the distillery, warrants a review due to its considerable merits alone.

First of all, this whisky is the color of straw or perhaps of the hair of a tow-headed prince from Scandinavia, and I don’t say that just because I live in Norway now. The nose is clean and less smoky than one might expect from a Lagavulin. But the peat abides, like a dude, only in a much cleaner way (well scrubbed, even).

The mouth is beautifully balanced and light. That might be because the casks used for this were nearly exhausted (or so I heard) to get the flavor profile–or at least the type of flavor profile–to line up with the experience that provoked Alfred Barnard to write in his The Whisky Distilleries of the United Kingdom that the Lagavulin 8 Year Old was the best whisky he had tried out of God knows how many whiskies from over 150 different distilleries he’d visited. The nearly exhausted casks and only eight years in them allows the flavor of the grain to really shine through (and it accounts for the color as well). And though the casks were well-worn, the Bourbon cask flavor also comes through. The youth of this whisky makes it lively–punchy even–but the classic Lagavulin signature runs through it from beginning to end like a bright ribbon threaded through the knots of a crocheted blanket.

The finish is where the succulent, fuzzy, soft, and clean coal smoke flavors really assert themselves. (What’s that? You say you didn’t know clean coal existed? That you always thought it was a fantasy of a dying industry? Well, note: I mean the flavor, which is quite clean, albeit buttressed by notes of coal smoke. Alas, this may be as close as we ever come to actual clean coal technology–but I want it in the record that Lagavulin pioneered it.) It’s refined and precocious. It’s Lagavulin, but stripped of all of its velvet finery and presented to you like the spine of a sturgeon pulled intact from its flesh by David Copperfield as he plays out his new gig table-side at the seafood restaurant in Caesar’s Palace Las Vegas. (You might ask what his career has come to, but realize: he also deftly–and flamboyantly–separates lobsters from their shells, he makes anchovies vanish in the Caesar salad (also made table-side), and he’s been known make a whole sirloin disappear if the waitstaff doesn’t get it expedited quickly–so the magic is still there.)

Rating:
–On the scale of bottles I purchased myself over the years and reviewed with John and Bill–
The Lagavulin 8 Year 200th Anniversary Limited Edition is one of the more surprising to the upside–It’s just too bad that I didn’t get a chance to finish that lovely 1 liter before moving to Norway, but at least the rest went to a loving home (John’s).