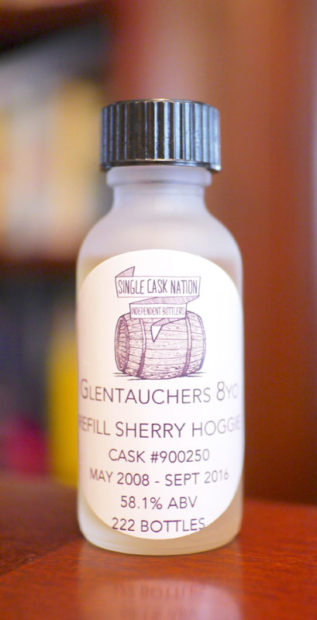 Tasting notes:
The Single Cask Nation Glentauchers 8yo refill sherry opens with exploding green apples and lightning-singed pinewood shingles on an A-frame chalet built by hippies in Modesto, California. We also got a cape made from opalescent, iridescent beetle carapaces said to confer invisibility upon anyone wearing it. (It’s fabled powers seemed to fail when John was arrested trying to sneak into Scarlett Johansson’s estate, but perhaps that because he forgot the crucial action of first anointing himself with extra virgin canola oil.)

[Stephen: Bill! There’s no such thing as extra virgin canola oil!]
Not as far as you know, Stephen.

The mouthfeel is syrupy, like reduced apple cider drizzled over a peep made from ghee. A ghee peep. A gheep? Anyhoo, there’s tropical fruit candy that Willy Wonka would make, if he didn’t have to make it resemble actual fruit. It’s bright, electric, star-anise-y, sweet-and-sour, topsy-turvy mouth music-y as the Tallis Scholars singing “Spem in Alium” for the 50 Shades of Grey soundtrack–which has to be the most unforeseen combination of high and low culture imaginable.

The finish brings made-with-cream butterscotch. There’s a soupçon of yarrow root (emphatically not being used for prophylactic or homeopathic purposes) at the top of the palate, but it moves swiftly to the sweet and sour (but not sweet-and-sour, if that makes sense) note that is the hallmark of this dram.


Rating:
On the scale of oxymoronic sayings–
The Single Cask Nation Glentauchers 8 Year 2008 (Refill Sherry Hoggie)  is “If the rich could hire the poor to die for them, the poor would make a very nice living.”–Sign me up, especially if it was the mortality equivalent of a reverse mortgage!